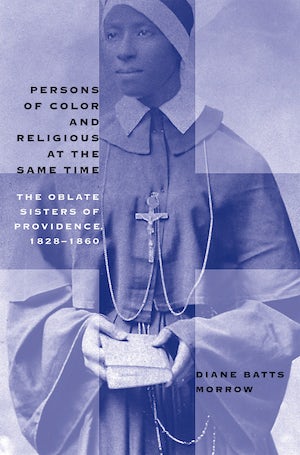 2004 Distinguished Book Award, Conference on the History of Women Religious

Founded in Baltimore in 1828 by a French Sulpician priest and a mulatto Caribbean immigrant, the Oblate Sisters of Providence formed the first permanent African American Roman Catholic sisterhood in the United States. It still exists today. Exploring the antebellum history of this pioneering sisterhood, Diane Batts Morrow demonstrates the centrality of race in the Oblate experience.

By their very existence, the Oblate Sisters challenged prevailing social, political, and cultural attitudes on many levels. White society viewed women of color as lacking in moral standing and sexual virtue; at the same time, the sisters' vows of celibacy flew in the face of conventional female roles as wives and mothers. But the Oblate Sisters' religious commitment proved both liberating and empowering, says Morrow. They inculcated into their communal consciousness positive senses of themselves as black women and as women religious. Strengthened by their spiritual fervor, the sisters defied the inferior social status white society ascribed to them and the ambivalence the Catholic Church demonstrated toward them. They successfully persevered in dedicating themselves to spiritual practice in the Roman Catholic tradition and their mission to educate black children during the era of slavery.

Diane Batts Morrow is associate professor of history and African American studies at the University of Georgia in Athens.
For more information about Diane Batts Morrow, visit the Author Page.

"Meticulous and inspiring scholarship. . . . The greatest contribution of Persons of Color and Religious at the Same Time is its sustained attention to race in the prisms of American Catholicism and women's religious life in the antebellum period."--Religious Studies Review

"Morrow's contextually sensitive recovery of the emergence of this distinctive black Catholic institution is a valuable contribution to antebellum religious history."--Journal of Southern History

"Persons of Color and Religious at the Same Time is the latest, most rigorous, and most enlightening account of the Oblate sisterhood."--Journal of the Early Republic

"Well-written and based on prodigious research, [this book] undoubtedly enhances our general understanding of the antebellum United States. . . . Morrow's interpretation of race, religion and gender in the Oblate community will challenge historians of U.S. Catholicism who do not attend to race, scholars of African-American religion who ignore Catholics, and historians of American women who refuse to see religious identity as a pathway to female agency."--American Catholic Studies