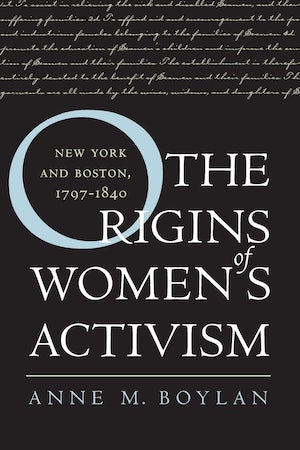 2004 Certificate of Commendation, American Association for State and Local History

Tracing the deep roots of women's activism in America, Anne Boylan explores the flourishing of women's volunteer associations in the decades following the Revolution. She examines the entire spectrum of early nineteenth-century women's groups--Protestant, Catholic, and Jewish; African American and white; middle and working class--to illuminate the ways in which race, religion, and class could bring women together in pursuit of common goals or drive them apart.

Boylan interweaves analyses of more than seventy organizations in New York and Boston with the stories of the women who founded and led them. In so doing, she provides a new understanding of how these groups actually worked and how women's associations, especially those with evangelical Protestant leanings, helped define the gender system of the new republic. She also demonstrates as never before how women in leadership positions combined volunteer work with their family responsibilities, how they raised and invested the money their organizations needed, and how they gained and used political influence in an era when women's citizenship rights were tightly circumscribed.

Anne M. Boylan is professor of history and women's studies at the University of Delaware. She is author of Sunday School: The Formation of an American Institution, 1790-1880.
For more information about Anne M. Boylan, visit the Author Page.

"Boylan's narrative of women and associational activity gives meaning to the word definitive. In compelling portraits of individuals and widely ranging analysis, we see the galvanizing force of 'women's activism' writ large."--Journal of American History

"[The Origins of Women's Activism: New York and Boston, 1797-1840] is the definitive history of the emergence and maturation of women's organizations in the key cities of New York and Boston in the early nineteenth century. . . . Brilliant and path-breaking work."--H-SHEAR

"Important revelations emerge from this comprehensive study. . . . One hopes that others will walk through the door [Boylan] has opened by the inclusion of Catholics to begin to write women's history in which discussions of gender include the impact of distinctive Catholic values, practices, and institutions."--Catholic Historical Review

"By combining exhaustive research on seventy-seven organizations and 1,142 individuals with a mastery of the secondary literature, [Boylan] weaves her history of women's organizations and gender ideology into the tapestry of economic booms and busts, religious revivals and rivalries, developing class consciousness, immigration, and shifting political power that characterized the period."--History of Education Quarterly