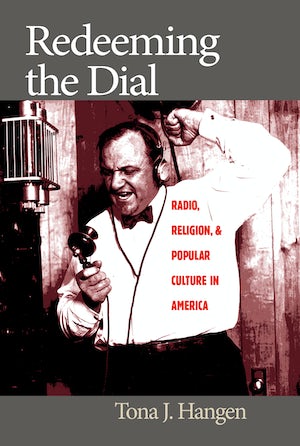 One of the “Dozen Best Books on the History of Media and Religion”,

Blending cultural, religious, and media history, Tona Hangen offers a richly detailed look into the world of religious radio. She uses recordings, sermons, fan mail, and other sources to tell the stories of the determined broadcasters and devoted listeners who, together, transformed American radio evangelism from an on-air novelty in the 1920s into a profitable and wide-reaching industry by the 1950s.

Hangen traces the careers of three of the most successful Protestant radio evangelists--Paul Rader, Aimee Semple McPherson, and Charles Fuller--and examines the strategies they used to bring their messages to listeners across the nation. Initially shut out of network radio and free airtime, both of which were available only to mainstream Protestant and Catholic groups, evangelical broadcasters gained access to the airwaves with paid-time programming. By the mid-twentieth century millions of Americans regularly tuned in to evangelical programming, making it one of the medium's most distinctive and durable genres. The voluntary contributions of these listeners in turn helped bankroll religious radio's remarkable growth.

Revealing the entwined development of evangelical religion and modern mass media, Hangen demonstrates that the history of one is incomplete without the history of the other; both are essential to understanding American culture in the twentieth century.

Tona J. Hangen is a lecturer in the History and Literature Program at Harvard University.
For more information about Tona J. Hangen, visit the Author Page.

"In this engagingly written and accessible study, Hangen provides a window into both the development of evangelical Christianity in the 20th century and the understudied world of radio. . . . Hangen does readers a great service by fleshing out the main characters and contentions of radio's heyday. . . . [Hangen] is a highly skilled and innovative writer, with a remarkable talent for description and for employing primary sources to invite readers into the story. She also makes her mark on how evangelical history is told."--Publishers Weekly

"Hangen probes an important subject to which historians are devoting growing attention: the extraordinarily complicated relationship of evangelicals with popular American culture. . . . Hangen clearly explicates the now largely forgotten story of radio evangelism. . . . She is right to point to evangelism's embrace of modern media as an essential factor in its success, and she astutely analyzes how popular culture was transformed by evangelism."--Atlantic Monthly

"[Redeeming the Dial: Radio, Religion, and Popular Culture in America] is an insightful examination of a rather neglected subject: the interrelationship between religion and radio. Tona J. Hangen skillfully analyzes what radio meant for religious practices and what religious broadcasting meant for radio as an industry. . . . Recommended for academic libraries and general libraries with strong holdings in religion."--Historian

"Hangen's Redeeming the Dial: Radio, Religion, and Popular Culture in America expertly examines the roots of early twentieth-century evangelicals' savvy use of the modern medium of radio."--Gulf South Historical Review

"Hangen has found an important niche in the growing media history literature. . . . Hangen's welcome book adds to our knowledge of American broadcasting history by bringing to life the listening habits of a largely overlooked radio audience."--Australasian Journal of American Studies

"For those interested in American religious history, popular culture, and communications, I recommend this work for its fresh insights into religion and how it is shared."--American Historical Review