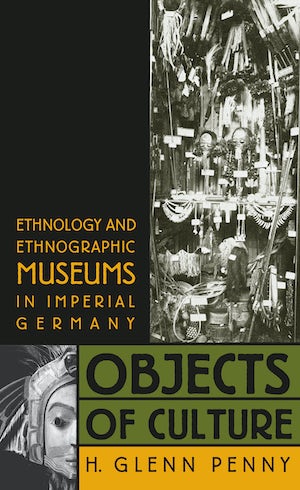 Honorable Mention, William A. Douglass Prize in Europeanist Anthroplogy, Society for the Anthropology of Europe

In the late nineteenth century, Germans spearheaded a worldwide effort to preserve the material traces of humanity, designing major ethnographic museums and building extensive networks of communication and exchange across the globe. In this groundbreaking study, Glenn Penny explores the appeal of ethnology in Imperial Germany and analyzes the motivations of the scientists who created the ethnographic museums.

Penny shows that German ethnologists were not driven by imperialist desires or an interest in legitimating putative biological or racial hierarchies. Overwhelmingly antiracist, they aspired to generate theories about the essential nature of human beings through their museums' collections. They gained support in their efforts from boosters who were enticed by participating in this international science and who used it to promote the cosmopolitan character of their cities and themselves. But these cosmopolitan ideals were eventually overshadowed by the scientists' more modern, professional, and materialist concerns, which dramatically altered the science and its goals.

By clarifying German ethnologists' aspirations and focusing on the market and conflicting interest groups, Penny makes important contributions to German history, the history of science, and museum studies.

"Penny's thorough and innovative approach make this book a strong introduction to museum culture and the development of ethnology in Imperial Germany. The author adeptly manages a large amount of archival and secondary material without losing the fascinating threads of a story that is well conceived and well told."--German History

"[Objects of Culture: Ethnology and Ethnographic Museums in Imperial Germany] is a provocative, challenging book that deserves a readership beyond the field of museum history."--H-German

"By examining the history of ethnographic museums in Germany with attention to the specificity of local institutional processes, at the same time placing them in an international market framework and the role of conflicting interest groups and audiences, Penny offers an historically grounded contrast to what are by now the somewhat predictable tendencies of post-colonial critical literature."--George W. Stocking, University of Chicago

"The achievement of this book is to trace the makeover of a polymorphous science of ethnology and of a budding ethnographic museum culture in Germany . . . from cosmopolitan and humanist ideals into an anti-humanist politics of envisioning global order in a hierarchy of races."--Michael Geyer, University of Chicago