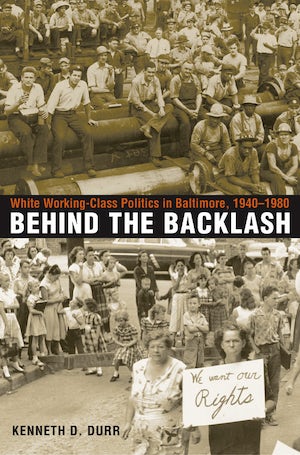 In this nuanced look at white working-class life and politics in twentieth-century America, Kenneth Durr takes readers into the neighborhoods, workplaces, and community institutions of blue-collar Baltimore in the decades after World War II.

Challenging notions that the "white backlash" of the 1960s and 1970s was driven by increasing race resentment, Durr details the rise of a working-class populism shaped by mistrust of the means and ends of postwar liberalism in the face of urban decline. Exploring the effects of desegregation, deindustrialization, recession, and the rise of urban crime, Durr shows how legitimate economic, social, and political grievances convinced white working-class Baltimoreans that they were threatened more by the actions of liberal policymakers than by the incursions of urban blacks.

While acknowledging the parochialism and racial exclusivity of white working-class life, Durr adopts an empathetic view of workers and their institutions. Behind the Backlash melds ethnic, labor, and political history to paint a rich portrait of urban life--and the sweeping social and economic changes that reshaped America's cities and politics in the late twentieth century.

Kenneth D. Durr is director of the History Division at History Associates Incorporated in Rockville, Maryland.

"An important study of working-class conservatism that neither romanticizes nor dismisses his subjects. . . . [Durr] succeeds in demonstrating that understanding the causes of white backlash requires attention not just to racism but to related cultural concerns as well."--Journal of American History

"[This book] is exhaustively researched . . . and persuasively argued by a scholar steeped in the historical and sociological literature. . . . It brings together a great deal of new and valuable material on the urban setting of [Baltimore]."--Journal of Southern History

"Rare has been a scholar who has been capable of merging American class, cultural, political, and urban history into a brilliantly written tome-until now. . . . Kenneth Durr has joined the lonely ranks of Thernstrom and Fass."--H-1960s

"A substantial addition to the literature on working-class politics, the white backlash, the decline of the New Deal coalition, and the Democratic Party's loss of connection with working-class, urban, ethnic voters in the period from 1940 to 1980."--Ronald P. Formisano, University of Kentucky