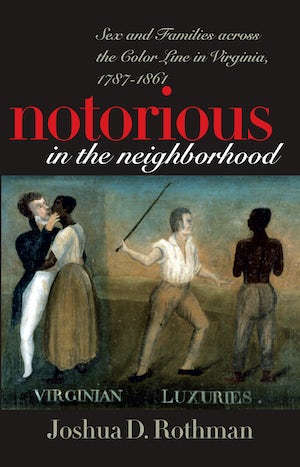 2004 Outstanding Book Award, Organization for the Study of Communication, Language, and Gender

Laws and cultural norms militated against interracial sex in Virginia before the Civil War, and yet it was ubiquitous in cities, towns, and plantation communities throughout the state. In Notorious in the Neighborhood, Joshua Rothman examines the full spectrum of interracial sexual relationships under slavery--from Thomas Jefferson, Sally Hemings, and the intertwined interracial families of Monticello and Charlottesville to commercial sex in Richmond, the routinized sexual exploitation of enslaved women, and adultery across the color line. He explores the complex considerations of legal and judicial authorities who handled cases involving illicit sex and describes how the customary toleration of sex across the color line both supported and undermined racism and slavery in the early national and antebellum South.

White Virginians allowed for an astonishing degree of flexibility and fluidity within a seemingly rigid system of race and interracial relations, Rothman argues, and the relationship between law and custom regarding racial intermixture was always shifting. As a consequence, even as whites never questioned their own racial supremacy, the meaning and significance of racial boundaries, racial hierarchy, and ultimately of race itself always stood on unstable ground--a reality that whites understood and about which they demonstrated increasing anxiety as the nation's sectional crisis intensified.

"Rothman has succeeded in providing a richly nuanced picture of the dynamics of race and sex in antebellum Virginia."--Journal of American History

"A fascinating and well-supported portrayal of Virginians' attitudes toward interracial sex in the antebellum period."--Florida Historical Quarterly

"[A] smart, well-researched, and readable book."--William and Mary Quarterly

"Notorious in the Neighborhood makes an important contribution to the historical literature by uncovering so many instances of interracial congress and convincing us of both their variety and their ordinariness. With its focus more on behavior than on values, this book should serve as a corrective to works that treat race primarily as an intellectual development."--Journal of Southern History 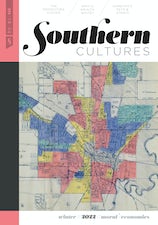 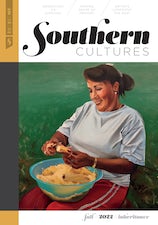