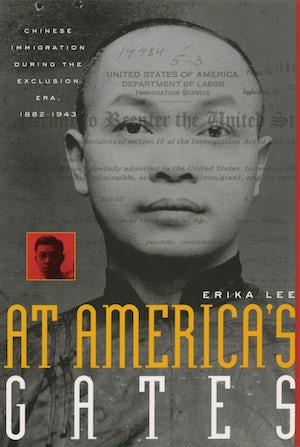 With the Chinese Exclusion Act of 1882, Chinese laborers became the first group in American history to be excluded from the United States on the basis of their race and class. This landmark law changed the course of U.S. immigration history, but we know little about its consequences for the Chinese in America or for the United States as a nation of immigrants.

At America's Gates is the first book devoted entirely to both Chinese immigrants and the American immigration officials who sought to keep them out. Erika Lee explores how Chinese exclusion laws not only transformed Chinese American lives, immigration patterns, identities, and families but also recast the United States into a "gatekeeping nation." Immigrant identification, border enforcement, surveillance, and deportation policies were extended far beyond any controls that had existed in the United States before.

Erika Lee is associate professor of history at the University of Minnesota-Twin Cities.
For more information about Erika Lee, visit the Author Page.

"The author's openness and sensitivity to the inherent problems and flaws with the government records of the Chinese immigrants . . . demonstrates her seriousness and carefulness as a scholar, and her skillful dissecting of a body of enormously complicated materials makes the book a remarkable historical study. With its elegant style and clear language, this book can be appreciated not only by scholars and graduate and undergraduate students but also by the general public."--Journal of American History

"Scholarly substance wrapped up in . . . a well organized and clearly written package . . . The single most useful book on the history of Chinese exclusion. . . . The strongest, best grounded, and most persuasive assessment of the long historical shadow Chinese exclusion has cast over the development of American immigration policy. It deserves a wide readership."--Journal of Social History

"Extensively researched. . . . [At America's Gate: Chinese Immigration during the Exclusion Era, 1882-1943] is helpful when trying to understand our government's complicated laws regarding immigration: encouraging foreigners to immigrate when their services are needed and excluding them when it seems appropriate."--Journal of the West

"The book, eloquently written with rich original materials, contributes to the existing literature on United States immigration history and Asian American studies, and challenges scholars to see a significant connection between Chinese exclusion and the United States as a gate-keeping nation."--Journal of American Ethnic History

"Lee has authored a masterful book, well written and based on extensive research in both English and Chinese sources."--American Historical Review