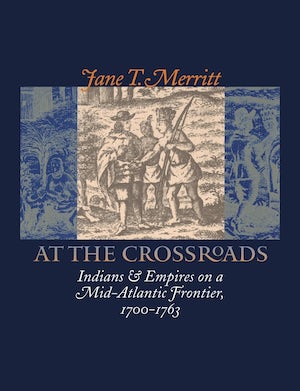 Examining interactions between native Americans and whites in eighteenth-century Pennsylvania, Jane Merritt traces the emergence of race as the defining difference between these neighbors on the frontier.

Before 1755, Indian and white communities in Pennsylvania shared a certain amount of interdependence. They traded skills and resources and found a common enemy in the colonial authorities, including the powerful Six Nations, who attempted to control them and the land they inhabited. Using innovative research in German Moravian records, among other sources, Merritt explores the cultural practices, social needs, gender dynamics, economic exigencies, and political forces that brought native Americans and Euramericans together in the first half of the eighteenth century.

But as Merritt demonstrates, the tolerance and even cooperation that once marked relations between Indians and whites collapsed during the Seven Years' War. By the 1760s, as the white population increased, a stronger, nationalist identity emerged among both white and Indian populations, each calling for new territorial and political boundaries to separate their communities. Differences between Indians and whites--whether political, economic, social, religious, or ethnic--became increasingly characterized in racial terms, and the resulting animosity left an enduring legacy in Pennsylvania's colonial history.

Jane T. Merritt specializes in early American History from an Atlantic World perspective. In particular, she has written on eighteenth century Native American encounters in the mid-Atlantic region and is currently exploring the development of consumer markets, British imperial policy, the cultural life of the American colonies, and the emergence of the United States as a commercial empire through a study of the tea trade.
For more information about Jane T. Merritt, visit the Author Page.

"Provides disciplined historical coverage. . . . Should stand as a model of . . . historical representation."--Eighteenth-Century Studies

"A compelling look at life in the fractured and often fractious world of frontier Pennsylvania. . . . [An] extensive and impressive discussion of the rise of nationalism and the pull of empire."--Journal of Colonialism and Colonia History

"This well-researched book uses sophisticated analysis and innovative sources to tell an old story in a new and exciting way. The author is especially strong in telling the personal reality of this struggle."--Choice

"A work that will stand as a rich contribution not only to several lively schools of work--on memory and history, gender, language, Native American syncretic religion, race, and nation--but also to the burgeoning body of innovative scholarly work on the middle ground of Native American relations with Euramericans in the mid-Atlantic region and the Ohio Valley."--American Historical Review

"Merritt's study is enhanced by the clearest of maps and the most relevant of illustrations. Her work in German-language sources and Moravian records will add tremendously to scholarly understanding of Pennsylvania's backcountry. Merritt's work goes beyond a consideration of events; she successfully incorporates an analysis of dreams, language, and images to summon up a compelling vision of frontier life."--Historian

"Compelling. . . . Merritt has breathed fresh life into this sad story, in a book that every specialist will want to read."--Journal of American Ethnic History