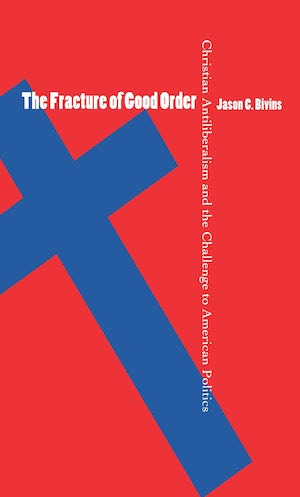 To purchase online via an independent bookstore, visit Bookshop.org
Whether picketing outside abortion clinics, speaking out at school board meetings, or attending anti-death penalty vigils, many Americans have publicly opposed local, state, or federal government policies on the basis of their religious convictions. In The Fracture of Good Order, Jason Bivins examines the growing phenomenon of Christian protest against civil authority and political order in the United States. He argues that since the 1960s, there has been a proliferation of religious activism against what protesters perceive as government's excessive power and lack of moral principle. Calling this phenomenon "Christian antiliberalism," Bivins finds at its center a belief that American politics is based on a liberal tradition that gives government too much social and economic influence and threatens the practice of a religious life.

Focusing on the Catholic pacifism of Daniel and Philip Berrigan and the Jonah House resistance community, the Christian Right's homeschooling movement, and the evangelical Sojourners community, Bivins combines religious studies with political theory to explore the common ground shared by these disparate groups. Despite their vast ideological and institutional differences, Bivins argues, these activists justify their actions in overtly religious terms based on a rejection of basic tenets of the American political system. Analyzing the widespread dissatisfaction with the conventional forms of political identity and affiliation that characterize American civic life today, Bivins sheds light on the complex relations between religion and democratic society.

Jason C. Bivins, associate professor and associate head of the Department of Philosophy and Religion at North Carolina State University in Raleigh, is coauthor of Introduction to Christianity.
For more information about Jason C. Bivins, visit the Author Page.

"Historians and political commentators have often observed the contentious political role that religion plays in American life, but rarely with the sociohistorical sensitivity and theoretical skill of Jason C. Bivins. . . . Bivins provides insights not only into how Americans conceptualize religion, politics, and culture but into how they think about democracy and democratic institutions."--American Historical Review

"This is a provocative book that . . . should be read by scholars interested in religion and politics."--Journal of Southern History

"This is a fascinating book that uses the concept of Christian antiliberalism to tie together disparate figures such as the Berrigans, Jim Wallis, and Michael Farris. Bivins makes these cases come alive, and he gets the details right. This well-written book will stimulate the thinking of scholars and students. Highly recommended."--Clyde Wilcox, Georgetown University

"Bivins argues that many who advocate a return to religion do so in ignorance of what religion is. He shows us religion that refuses to 'play nice.'"--Winnifred Fallers Sullivan, University of Chicago