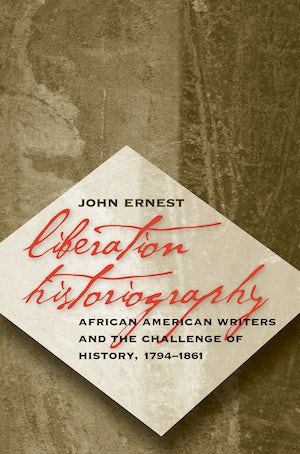 As the story of the United States was recorded in pages written by white historians, early-nineteenth-century African American writers faced the task of piecing together a counterhistory: an approach to history that would present both the necessity of and the means for the liberation of the oppressed. In Liberation Historiography, John Ernest demonstrates that African Americans created a body of writing in which the spiritual, the historical, and the political are inextricably connected. Their literature serves not only as historical recovery but also as historical intervention.

Ernest studies various cultural forms including orations, books, pamphlets, autobiographical narratives, and black press articles. He shows how writers such as Martin R. Delany, David Walker, Frederick Douglass, William Wells Brown, and Harriet Jacobs crafted their texts in order to resituate their readers in a newly envisioned community of faith and moral duty. Antebellum African American historical representation, Ernest concludes, was both a reading of source material on black lives and an unreading of white nationalist history through an act of moral imagination.


For more information about John Ernest, visit the Author Page.

"Wide-ranging in its coverage and provocative in its conclusions, Liberation Historiography represents a much-needed addition to the growing literature on black historiography."--Journal of American History

"Places [Ernest] solidly at the forefront of [early African American literary studies], in league with our most careful, nuanced, and erudite scholars. . . . A unique work of scholarship that demonstrates what is possible when a scholar who is a serious student of literature and culture also becomes a serious student of history and historiography."--American Historical Review

"Ernest writes with impressive authority: his mastery of the surprisingly voluminous body of early black public discourse and of the now substantial secondary literature on that discourse is obvious throughout."--Journal of Southern History

"Ernest brings together the best of revisionist historical methodology with sensitivity to the specific religious and political culture of a largely Northern African American community. . . . With its subtle, well-grounded contextual readings of a number of lesser-known historical texts, Ernest's work will serve as a valuable starting point for scholars and students conducting research in nineteenth-century African American culture."--American Literature

"A welcome addition to the scholarly contributions in this engagingly contentious subfield of intellectual history. . . . John Ernest has done a remarkably adept job of exhuming long forgotten writers."--CLIO