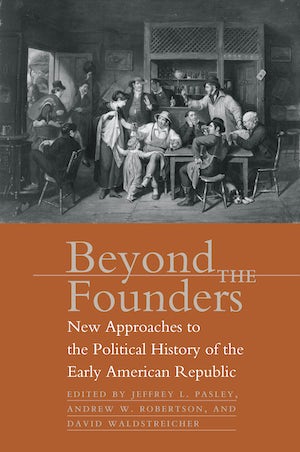 In pursuit of a more sophisticated and inclusive American history, the contributors to Beyond the Founders propose new directions for the study of the political history of the republic before the Civil War. In ways formal and informal, symbolic and tactile, this political world encompassed blacks, women, entrepreneurs, and Native Americans, as well as the Adamses, Jeffersons, and Jacksons, all struggling in their own ways to shape the new nation and express their ideas of American democracy.

Taking inspiration from the new cultural and social histories, these political historians show that the early history of the United States was not just the product of a few "founding fathers," but was also marked by widespread and passionate popular involvement; print media more politically potent than that of later eras; and political conflicts and influences that crossed lines of race, gender, and class.

Jeffrey L. Pasley is associate professor of history at the University of Missouri, Columbia, and author of "The Tyranny of Printers": Newspaper Politics in the Early American Republic.
For more information about Jeffrey L. Pasley, visit the Author Page.

Andrew W. Robertson is associate professor of history at Lehman College and the Graduate Center, City University of New York, and author of The Language of Democracy: Political Rhetoric in the U.S. and Britain, 1790-1900.
For more information about Andrew W. Robertson, visit the Author Page.

David Waldstreicher is professor of history at Temple University and author of Runaway America: Benjamin Franklin, Slavery, and the American Revolution.
For more information about David Waldstreicher, visit the Author Page.

"A valuable collection of essays that introduces a new way of looking at the political history of the early republic."--The Pennsylvania Magazine of History & Biography

"This collection of invaluable essays comes as a welcome relief from the current cult of celebrity. [It] penetrates beyond the plethora of biographies of the Founding Fathers to demonstrate how the 'newest political history' broadens our understanding of the political character of the early republic."--Journal of Southern History

"This superb collection of essays does more than go 'beyond the founders.' It demonstrates the intellectual curiosity, fresh findings, and interpretive skills of a new generation of American political historians."--Joyce Appleby, University of California, Los Angeles

"There is no question that the scholarship sampled in Beyond the Founders enriches our understanding of the early United States."--Journal of American History

"Beyond the Founders provides a superb picture of the state of play in the history of the early American republic. This strong collection of essays reflects the vitality and excitement of one of the hottest fields in American historiography."--Peter S. Onuf, University of Virginia