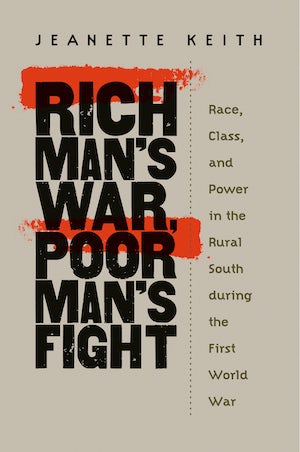 During World War I, thousands of rural southern men, black and white, refused to serve in the military. Some failed to register for the draft, while others deserted after being inducted. In the countryside, armed bands of deserters defied local authorities; capturing them required the dispatch of federal troops into three southern states.

Jeanette Keith traces southern draft resistance to several sources, including whites' long-term political opposition to militarism, southern blacks' reluctance to serve a nation that refused to respect their rights, the peace witness of southern churches, and, above all, anger at class bias in federal conscription policies. Keith shows how draft dodgers' success in avoiding service resulted from the failure of southern states to create effective mechanisms for identifying and classifying individuals. Lacking local-level data on draft evaders, the federal government used agencies of surveillance both to find reluctant conscripts and to squelch antiwar dissent in rural areas.

Jeanette Keith is professor of history at Bloomsburg University in Pennsylvania. She is author of a two-volume history of the South and of Country People in the New South: Tennessee's Upper Cumberland.
For more information about Jeanette Keith, visit the Author Page.

"Keith's wonderfully lucid account of draft resistance in the rural South offers an exemplary case study of how state efforts to impose rational order were frustrated by ordinary people getting on with their lives."--American Historical Review

"Keith provides a thoughtful, discerning account of the distinctive character of the anti-war movement in the rural South. . . . A welcome addition to the history of this period."--History News Network

"[Keith] provides a good, comprehensive overview of the political and social aspects of dissent."--H-SAWH

"During World War I class and urban-rural tensions fueled opposition to the draft among whites and blacks. Through an insightful exploration of this resistance, Rich Man's War, Poor Man's Fight boldly challenges the image of the South as monolithic and militaristic. This carefully argued book, based on rarely used archival sources, thereby broadens our understanding of early twentieth-century southern society as well as America's response to World War I."--Gaines M. Foster, Louisiana State University