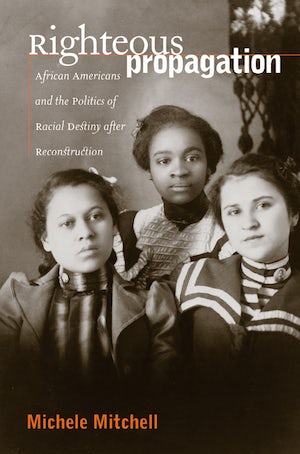 To purchase online via an independent bookstore, visit Bookshop.org
Between 1877 and 1930--years rife with tensions over citizenship, suffrage, immigration, and "the Negro problem"--African American activists promoted an array of strategies for progress and power built around "racial destiny," the idea that black Americans formed a collective whose future existence would be determined by the actions of its members. In Righteous Propagation, Michele Mitchell examines the reproductive implications of racial destiny, demonstrating how it forcefully linked particular visions of gender, conduct, and sexuality to collective well-being.

Mitchell argues that while African Americans did not agree on specific ways to bolster their collective prospects, ideas about racial destiny and progress generally shifted from outward-looking remedies such as emigration to inward-focused debates about intraracial relationships, thereby politicizing the most private aspects of black life and spurring race activists to calcify gender roles, monitor intraracial sexual practices, and promote moral purity. Examining the ideas of well-known elite reformers such as Mary Church Terrell and W. E. B. DuBois, as well as unknown members of the working and aspiring classes, such as James Dubose and Josie Briggs Hall, Mitchell reinterprets black protest and politics and recasts the way we think about black sexuality and progress after Reconstruction.

Michele Mitchell is associate professor of history and Afroamerican and African Studies at the University of Michigan. She is co-editor of Dialogues of Dispersal: Gender, Sexuality, and African Diasporas.
For more information about Michele Mitchell, visit the Author Page.

"Breathing new life into a familiar narrative, Mitchell's 'social history of ideas' offers more breadth and depth than intellectual histories of race leaders. . . . By tackling the most sensitive aspects of racial reform--imperialism, eugenics, and female sexuality--she has done us a great service."--Journal of American History

"Makes vital contributions to the historiography of American sexuality and offers a provocative reinterpretation of black cultural history. . . . Should be mandatory reading for historians of African American history and for a broader audience seeking to gain a fuller understanding of Americans' longstanding debates over black respectability and sexuality."--Historian

"Mitchell's nuanced analysis of the politics of racial destiny encompasses a broad spectrum of social projects and activists. . . . [She] has painstakingly uncovered the authors, social networks, texts, and cultural artifacts of a relatively unknown body of social thought."--American Historical Review

"Michele Mitchell has written a deeply thoughtful and intellectually adventurous study that demonstrates the importance of gender and sexuality to the developing discourses of 'racial destiny' and black nationalism. In so doing, she offers a significant perspective, not only on African American life, but also on American society in the post-Reconstruction era."--Steven Hahn, University of Pennsylvania 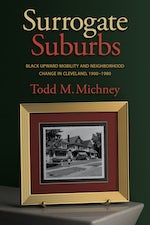