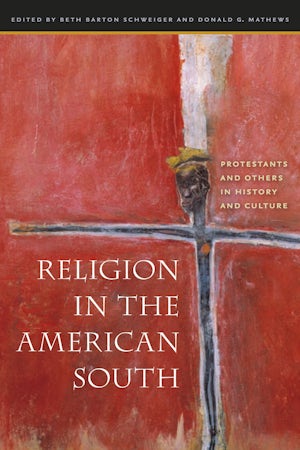 This collection of essays examines religion in the American South across three centuries--from the beginning of the eighteenth century to the civil rights movement of the 1960s. The first collection published on the subject in fifteen years, Religion in the American South builds upon a new generation of scholarship to push scholarly conversation about the field to a new level of sophistication by complicating "southern religion" geographically, chronologically, and thematically and by challenging the interpretive hegemony of the "Bible belt."

Contributors demonstrate the importance of religion in the South not only to American religious history but also to the history of the nation as a whole. They show that religion touched every corner of society--from the nightclub to the lynching tree, from the church sanctuary to the kitchen hearth.

These essays will stimulate discussions of a wide variety of subjects, including eighteenth-century religious history, conversion narratives, religion and violence, the cultural power of prayer, the importance of women in exploiting religious contexts in innovative ways, and the interracialism of southern religious history.

Beth Barton Schweiger is assistant professor of history at the University of Arkansas. She is author of The Gospel Working Up: Progress and the Pulpit in Nineteenth-Century Virginia.
For more information about Beth Barton Schweiger, visit the Author Page.

Donald G. Mathews is professor of history emeritus at the University of North Carolina at Chapel Hill and author or coauthor of several books, including Religion in the Old South.
For more information about Donald G. Mathews, visit the Author Page.

"Essential reading for those interested in where the study of the subject might be headed."--Journal of Southern Religion

"[A] masterful analysis of the interaction between black and white evangelicalism. . . . [The] categorizations (racism, racial interchange, and interracialism) have never been clearer, more precise, or more stimulating."--Arkansas Historical Quarterly

"Enriches this existing historiography and illustrates new directions of investigation. . . . An important contribution to the field of southern religion."--North Carolina Historical Review

"The essayists present thought-provoking research that will inspire further conversations about this large topic."--Choice

"Here's a really interesting and thoughtful selection of essays on Southern religion, and it should receive extra attention because of the impact that the yahoo Dixie churches had on the recent election. With the insights and background that this book provides, you might not feel any better about what happened at the polls last month, but you'll have a clearer idea of why it happened, and what it is that these characters are thinking."--Little Rock, Arkansas Times