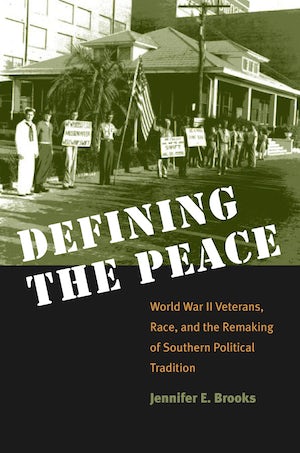 In the aftermath of World War II, Georgia's veterans--black, white, liberal, reactionary, pro-union, and anti-union--all found that service in the war enhanced their sense of male, political, and racial identity, but often in contradictory ways. In Defining the Peace, Jennifer E. Brooks shows how veterans competed in a protracted and sometimes violent struggle to determine the complex character of Georgia's postwar future.

Brooks finds that veterans shaped the key events of the era, including the gubernatorial campaigns of both Eugene Talmadge and Herman Talmadge, the defeat of entrenched political machines in Augusta and Savannah, the terrorism perpetrated against black citizens, the CIO's drive to organize the textile South, and the controversies that dominated the 1947 Georgia General Assembly. Progressive black and white veterans forged new grassroots networks to mobilize voters against racial and economic conservatives who opposed their vision of a democratic South. Most white veterans, however, opted to support candidates who favored a conservative program of modernization that aimed to alter the state's economic landscape while sustaining its anti-union and racial traditions.

As Brooks demonstrates, World War II veterans played a pivotal role in shaping the war's political impact on the South, generating a politics of race, anti-unionism, and modernization that stood as the war's most lasting political legacy.

"Brooks adds to a still emerging body of literature on the effects of local leaders to affect political, racial, and economic change after WWII. . . . Recommended."--Choice

"Jennifer Brooks has produced an engaging and well-researched study that illuminates the complexity of the South's political landscape in the post-World War II era. This book is essential for anyone seeking to understand the war's legacy and the critical role veterans played in shaping the region's political future."--Kari Frederickson, author of The Dixiecrat Revolt and the End of the Solid South, 1932-1968

"Others have examined the New South solution of economic progress and social conservatism that emerged from the political turmoil of the early postwar years, but they have approached their subject through the lens of national organizations and regional structural changes. Brooks's central contribution is to deal with veterans on their own terms--their individual and local search for a somehow better and more rewarding society."--Numan V. Bartley, E. Merton Coulter Professor Emeritus of History, University of Georgia