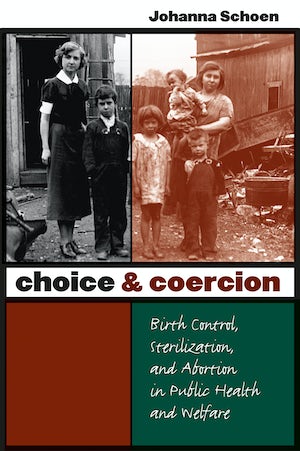 In August 2003, North Carolina became the first U.S. state to offer restitution to victims of state-ordered sterilizations carried out by its eugenics program between 1929 and 1975. The decision was prompted largely by a series of articles in the Winston-Salem Journal. These stories were inspired in part by the research of Johanna Schoen, who was granted unique access to summaries of 7,500 case histories and the papers of the North Carolina Eugenics Board.

In this book, Schoen situates the state's reproductive politics in a national and global context. Widening her focus to include birth control, sterilization, and abortion policies across the nation, she demonstrates how each method for limiting unwanted pregnancies had the potential both to expand and to limit women's reproductive choices. Such programs overwhelmingly targeted poor and nonwhite populations, yet they also extended a measure of reproductive control to poor women that was previously out of reach.

On an international level, the United States has influenced reproductive health policies by, for example, tying foreign aid to the recipients' compliance with U.S. notions about family planning. The availability of U.S.-funded family planning aid has proved to be a double-edged sword, offering unprecedented opportunities to poor women while subjecting foreign patients to medical experimentation that would be considered unacceptable at home.

Drawing on the voices of health and science professionals, civic benefactors, and American women themselves, Schoen's study allows deeper understandings of the modern welfare state and the lives of women.

Johanna Schoen is professor of history at Rutgers, the State University of New Jersey.
For more information about Johanna Schoen, visit the Author Page.

"An insightful and engaging account of local, national, and international struggles over the control of women's fertility. . . . Should be read by students and researchers alike interested in the American South, medicine, state formation, and the intersections of gender, race, and class."--NC Historical Review

"The material on North Carolina [is] compelling and highly accessible."--Journal of the History of Medicine

"[A] well-written book. . . . [that has] the sort of impact that many academics dream of initiating and rarely achieve."--Journal of Interdisciplinary History

"This is an important study, one that rightfully places North Carolina's story squarely on the historical map."--American Historical Review

"Schoen works from a dazzling array of material. . . . [She] sifts through this evidence with remarkable care and tact, providing a picture of the changing nature of women's access to reproductive technologies over several decades. The strength of the work lies in how Schoen refuses to shy away from complex and competing accounts of a fraught set of topics. . . . A bold and innovative move to set the terms on which we might be able to write global histories of reproduction."--Journal of the History of Medicine and Allied Sciences