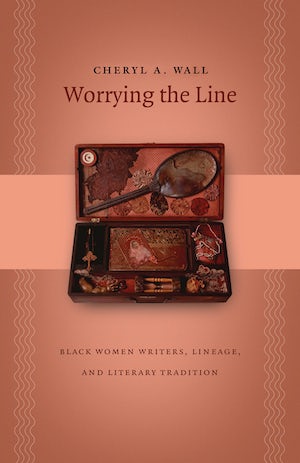 For blues musicians, "worrying the line" is the technique of breaking up a phrase by changing pitch, adding a shout, or repeating words in order to emphasize, clarify, or subvert a moment in a song. Cheryl A. Wall applies this term to fiction and nonfiction writing by African American women in the twentieth century, demonstrating how these writers bring about similar changes in African American and American literary traditions.

Examining the works of Lucille Clifton, Gayl Jones, Audre Lorde, Paule Marshall, Toni Morrison, Gloria Naylor, and Alice Walker, Wall highlights ways in which these authors construct family genealogies, filling in the gaps with dreams, rituals, music, or images that forge a connection to family lost through slavery. For the black woman author, Wall contends, this method of revising and extending canonical forms provides the opportunity to comment on the literary past while also calling attention to the lingering historical effects of slavery. For the reader, Wall shows, the images and words combine to create a new kind of text that extends meanings of the line, both as lineage and as literary tradition.

Cheryl A. Wall is professor of English at Rutgers University and author of Women of the Harlem Renaissance. She has edited five books, including Changing Our Words: Essays on Criticism, Theory, and Writing by Black Women and, most recently, a critical casebook on Zora Neale Hurston's Their Eyes Were Watching God.
For more information about Cheryl A. Wall, visit the Author Page.

"Artfully examines the literary genealogy of a prominent and influential group. . . . Offers keen insights into these writers' formal and thematic uses of other less literary sources. . . . Impressive."--Tulsa Studies in Women's Literature

"Takes its place alongside other powerful essay collections on the subject. . . . Conveys in intelligent and potentially quite rich ways the process at work in summoning memories, eliciting stories, and recasting them for new contexts."--Feminist Teacher

"At once clearly articulated and engagingly written, Worrying the Line offers rich insights into the works of twentieth-century African American women writers, brilliantly uncovering their complex responses to earlier writers, both male and female, of various ethnicities. . . . These studies powerfully reveal the complex literary legacies of slavery and suggest new and fruitful ways of thinking about the work of some of the most compelling writers of the twentieth century."--American Literature

"[A] fascinating study. . . . Cheryl Wall has given us yet another way of looking at black women's texts through the prism of our multifaceted experiences."--Journal of African American History

"A lucid map of black women's late 20th century literary writing deftly rendered by Wall. . . . This is a work of literary criticism I would recommend to nonacademic readers--and reading groups--who want to know more about how our most gifted African American women narrative artists work their magic to enhance readers' appreciation of the miracle of African American families, our cultural wealth, and dramatic historical legacy. Wall weaves a vivid tapestry that allows readers to see clearly common themes and significant relationships among the represented texts and better comprehend the rich cultural sources upon which the writers draw."--Black Issues Book Review