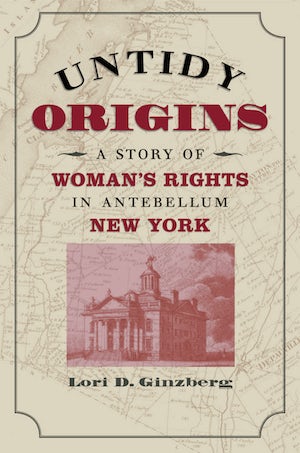 On a summer day in 1846--two years before the Seneca Falls convention that launched the movement for woman's rights in the United States--six women in rural upstate New York sat down to write a petition to their state's constitutional convention, demanding "equal, and civil and political rights with men." Refusing to invoke the traditional language of deference, motherhood, or Christianity as they made their claim, the women even declined to defend their position, asserting that "a self evident truth is sufficiently plain without argument." Who were these women, Lori Ginzberg asks, and how might their story change the collective memory of the struggle for woman's rights?

Very few clues remain about the petitioners, but Ginzberg pieces together information from census records, deeds, wills, and newspapers to explore why, at a time when the notion of women as full citizens was declared unthinkable and considered too dangerous to discuss, six ordinary women embraced it as common sense. By weaving their radical local action into the broader narrative of antebellum intellectual life and political identity, Ginzberg brings new light to the story of woman's rights and of some women's sense of themselves as full members of the nation.

Lori D. Ginzberg is associate professor of history and women's studies at Pennsylvania State University. She is author of two books, including Women and the Work of Benevolence: Morality, Politics, and Class in the Nineteenth-Century United States. A native of New York City, Ginzberg lives in Philadelphia.
For more information about Lori D. Ginzberg, visit the Author Page.

"Offers the opportunity to expand historians' comprehension of the complex flow of ideas in a given time and place, even when those ideas may have been considered too dangerous or indecorous to be heard."--The Historian

"Ginzberg's work has done a great service by complicating the story of feminism's origins and helping to reshape the agenda for future research."--Journal of Social History

"[Untidy Origins is] an admirable introduction to the drama of the woman suffrage movement, rich in its evocation of the time and place."--Women's Review of Books

"[Untidy Origins] is a very readable book for people interested in the state, political culture, reform, and women."--New York Journal of American History

"Inventive and well-written. . . . A considerable tour de force of energetic, local history research-the labor, frustrations, and thrills of which Ginzberg makes visible and illuminating for her readers."--Journal of American History

"Ginzberg's greatest achievement is to be found . . . in her vivid description of the context within which ordinary women in rural American in the antebellum period could and did construct their political identities. . . . This is an engagingly written book. Ginzberg's use of what she calls 'leaps of imagination' allows her to go beyond analysis of the facts to explore the world of possibilities."--American Historical Review