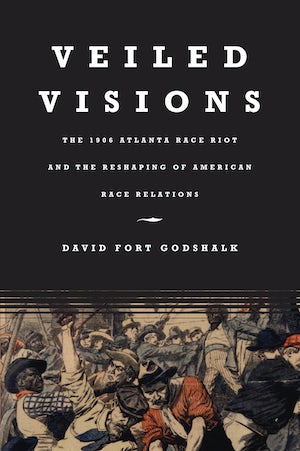 In 1906 Atlanta, after a summer of inflammatory headlines and accusations of black-on-white sexual assaults, armed white mobs attacked African Americans, resulting in at least twenty-five black fatalities. Atlanta's black residents fought back and repeatedly defended their neighborhoods from white raids. Placing this four-day riot in a broader narrative of twentieth-century race relations in Atlanta, in the South, and in the United States, David Fort Godshalk examines the riot's origins and how memories of this cataclysmic event shaped black and white social and political life for decades to come.

Nationally, the riot radicalized many civil rights leaders, encouraging W. E. B. Du Bois's confrontationist stance and diminishing the accommodationist voice of Booker T. Washington. In Atlanta, fears of continued disorder prompted white civic leaders to seek dialogue with black elites, establishing a rare biracial tradition that convinced mainstream northern whites that racial reconciliation was possible in the South without national intervention. Paired with black fears of renewed violence, however, this interracial cooperation exacerbated black social divisions and repeatedly undermined black social justice movements, leaving the city among the most segregated and socially stratified in the nation. Analyzing the interwoven struggles of men and women, blacks and whites, social outcasts and national powerbrokers, Godshalk illuminates the possibilities and limits of racial understanding and social change in twentieth-century America.

"A timely publication. . . . A page-turner which must be applauded for its readability and thorough documentation. It should find a ready audience not only in academe but also among readers in the general public."--Florida Historical Quarterly

"If the contours of Godshalk's narrative are familiar, his treatment is never facile. . . . Provides a complex and nuanced account of inter-class tension in the black community. . . . Noteworthy for its effort to factor themes of class and gender into a book so outwardly concerned with issues of race."--Journal of Social History

"Veiled Visions is superbly researched, skillfully organized, and vividly written. Godshalk manages to create a sense of momentum as context and analysis are seamlessly woven into a dramatic story of the growing tensions and the reckless incitements that ultimately led to the riot itself. His account of the background and aftermath of the riot gives us a wonderful portrait of the changing landscape of race, class, gender, and economic relationships in the urbanizing South of the early twentieth century."--Dan T. Carter, University of South Carolina

"[This] pioneering study of the 1906 Atlanta Race Riot is a brilliant exposition of the creation of Atlanta's myth of racial progressivism. . . . May be the best monograph ever written on the aftermath of a major race riot in a U.S. city. . . . Deserves the broadest possible audience . . . will critically inform debates in the histories of segregation, urban public policy, and poverty studies."--American Historical Review