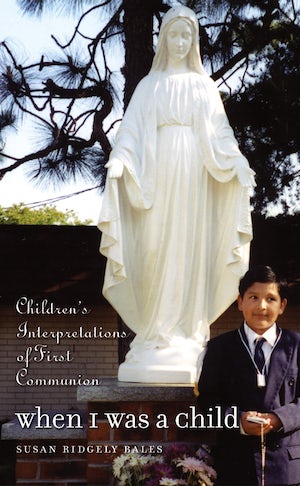 A Nota Bene selection of Chronicle of Higher Education

First Communion is generally understood as a rite of passage in which seven- and eight-year-old Catholic children transform from baptized participants in the Church to members of the body of Christ, the universal Catholic Church. This official Church account, however, ignores what the rite actually may mean to its participants. In When I Was a Child, Susan Ridgely Bales demonstrates that the accepted understanding of a religious ritual can shift dramatically when one considers the often neglected perspective of child participants.

Bales followed Faith Formation classes and interviewed communicants, parents, and priests in an African American parish and in a parish containing both white and Latino congregations. By letting the children speak for themselves through their words, drawings, and actions, When I Was a Child stresses the importance of rehearsal, the centrality of sensory experiences, and the impact of expectations in the communicants' interpretations of the Eucharist. In the first sustained ethnographic study of how children interpret and help shape their own faith, Bales finds that children's perspectives give new contours to the traditional understanding of a common religious ritual. Ultimately, she argues that scholars of religion should consider age as distinct a factor as race, class, and gender in their analyses.

Susan B. Ridgely is associate professor of religious studies at the University of Wisconsin-Madison.
For more information about Susan B. Ridgely, visit the Author Page.

"In this landmark study of children's interpretations of religious ritual, Bales makes a compelling case for scholars of religion to allow children's voices the chance to shape both the starting assumptions and the outcome of their work."--Family Ministry

"Bales has written a groundbreaking ethnography about children's ritual experience that challenges the long neglect of children by scholars of religion. Her scholarship is cutting edge, and her reflexive approach serves as a model for others who are conducting ethnographic research within faith communities and, especially, with children."--Sarah M. Pike, California State University, Chico