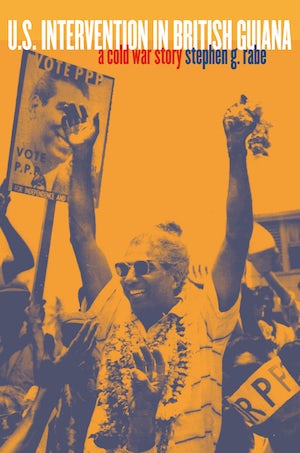 In the first published account of the massive U.S. covert intervention in British Guiana between 1953 and 1969, Stephen G. Rabe uncovers a Cold War story of imperialism, gender bias, and racism.

When the South American colony now known as Guyana was due to gain independence from Britain in the 1960s, U.S. officials in the Kennedy and Johnson administrations feared it would become a communist nation under the leadership of Cheddi Jagan, a Marxist who was very popular among the South Asian (mostly Indian) majority. Although to this day the CIA refuses to confirm or deny involvement, Rabe presents evidence that CIA funding, through a program run by the AFL-CIO, helped foment the labor unrest, race riots, and general chaos that led to Jagan's replacement in 1964. The political leader preferred by the United States, Forbes Burnham, went on to lead a twenty-year dictatorship in which he persecuted the majority Indian population.

Considering race, gender, religion, and ethnicity along with traditional approaches to diplomatic history, Rabe's analysis of this Cold War tragedy serves as a needed corrective to interpretations that depict the Cold War as an unsullied U.S. triumph.

Stephen G. Rabe is professor of history at the University of Texas at Dallas and author or coauthor of several books, including The Most Dangerous Area in the World: John F. Kennedy Confronts Communist Revolution in Latin America.
For more information about Stephen G. Rabe, visit the Author Page.

"This cautionary tale constitutes a major contribution to our understanding of major power intervention in Latin America and the rest of the world."--Hispanic American Historical Review

"Rabe has succeeded in artfully weaving a narrative that almost seamlessly balances a number of separate and complex conflicts. . . . Deserves to be, and should become, the standard text for the U.S. subversion of British Guiana for the foreseeable future."--Estudios Interdisciplinarios de America Latina y el Caribe

"A deeply engaging, lucid, and superb book. . . . The most complete account to date of what actually took place in British Guiana. . . . [Rabe's] research is meticulous; his factual presentation is flawless . . . his judgment is on the mark."--Journal of Cold War Studies

"A definitive and innovative analysis. . . . Rabe has found a rich and more complicated history of repeated and persistent US interventions in Guyana between 1953 and 1969 that has remained largely unknown."--International History Review

"A highly instructive history of an important and tragic place in Cold War history. Rabe's introduction of newly released documents will no doubt spark other scholars' interest in expanding and exploring new facets of this story."--American Historical Review

"[U.S. Intervention in British Guiana: A Cold War Story] makes an important contribution to the historical scholarship on British Guiana's (Guyana) struggle for independence. It should appeal to college students, scholars, government officials and others with an interest in Guyana and the Cold War."--The Americas