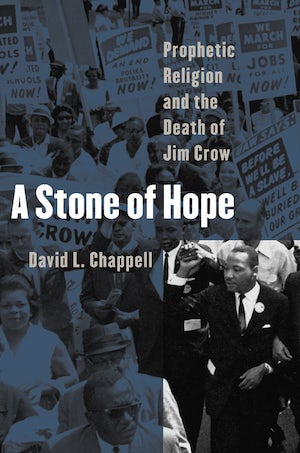 The civil rights movement was arguably the most successful social movement in American history. In a provocative new assessment of its success, David Chappell argues that the story of civil rights is not a story of the ultimate triumph of liberal ideas after decades of gradual progress. Rather, it is a story of the power of religious tradition.

Chappell reconsiders the intellectual roots of civil rights reform, showing how northern liberals' faith in the power of human reason to overcome prejudice was at odds with the movement's goal of immediate change. Even when liberals sincerely wanted change, they recognized that they could not necessarily inspire others to unite and fight for it. But the prophetic tradition of the Old Testament--sometimes translated into secular language--drove African American activists to unprecedented solidarity and self-sacrifice. Martin Luther King Jr., Fannie Lou Hamer, James Lawson, Modjeska Simkins, and other black leaders believed, as the Hebrew prophets believed, that they had to stand apart from society and instigate dramatic changes to force an unwilling world to abandon its sinful ways. Their impassioned campaign to stamp out "the sin of segregation" brought the vitality of a religious revival to their cause. Meanwhile, segregationists found little support within their white southern religious denominations. Although segregationists outvoted and outgunned black integrationists, the segregationists lost, Chappell concludes, largely because they did not have a religious commitment to their cause.

David L. Chappell is Rothbaum Professor of Modern American History at the University of Oklahoma. He is author of Inside Agitators: White Southerners in the Civil Rights Movement.
For more information about David L. Chappell, visit the Author Page.

"[A] pathbreaking study of prophetic Protestantism and the camapaign against Jim Crow."--Commonwealth

"Not 'just another civil rights book'; it's something of an event, and one sure to fodder for continued discussion and. . . fruitful dialogue. . . . Well-researched and written with originality and verve. . . . Leave[s] you with a fresh and invigorating perspective on the most important social movement of twentieth-century American history."--The North Star

“One of the three or four most important books on the civil rights movement. . . . This unusually sophisticated and subtle study takes an unconventional and imaginative approach by examining both sides of the struggle. . . . [Chappell] argues persuasively that revivalism engendered the civil rights movement’s solidarity, leadership, worldview, and rhetoric . . . [and] that the struggle against segregation triumphed owing not only to the religious views of southern blacks, but also to the religious views of southern whites.”--Atlantic Monthly

"For those who care about the role of religion in public life, this book offers not only a reckoning, but an awakening."--Word & World

"The effort [of reading] will be worthwhile, given the fresh and provocative arguments the author makes about issues still central to Americans in a new century when racial harmony and equality remain beyond easy grasp."--Arkansas Democrat-Gazette

"[A Stone of Hope] reads well and is quite accessible to laypersons as well as scholars and students in the field of history, religion, and cultural studies."--Alabama Review