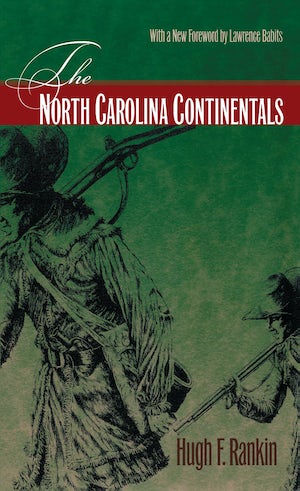 In this classic account of the Revolutionary War experiences of the North Carolina Continentals, Hugh F. Rankin traces the events leading to war in North Carolina and follows all the campaigns and battles in which the North Carolina Continentals took part--Brandywine, Germantown, Charleston, Savannah, Camden, Eutaw Springs, and others. He also provides descriptions of almost all of the significant personalities in the Continental Army. Originally published in 1971, this new edition contains a foreword by Lawrence Babits, introducing the book to a new generation of scholars and general readers interested in the Revolutionary War.

Hugh F. Rankin (1913-1989) taught history at Tulane University, where he was also faculty chair of athletics for many years. He wrote, cowrote, or edited sixteen books, including Rebels and Redcoats: The American Revolution through the Eyes of Those Who Fought and Lived It and Pirates of Colonial North Carolina.

"[North Carolina Continentals] has stood the test of time. [Rankin's] insightful commentary about North Carolina's military endeavors and the political difficulties of supporting Tarheel soldiers provided a key picture of Revolutionary efforts in the South. Moreover, Rankin brought these neglected Southern efforts to the front rank of Revolutionary War studies."--Lawrence Babits, from the Foreword

"Rankin cuts through a plethora of documentary evidence to present a lucid chronological narrative which describes the impact of the Revolution upon North Carolina. He combines the literary talents of a seasoned novelist with the analytical prowess of a veteran historian to present a work that deserves the accolades of his profession."--Military Affairs

"Rankin's skill in portraying the problems and accomplishments of the North Carolina Continentals is of a very high order."--American Historical Review

"[Rankin] reveals himself as perhaps the best narrative military historian working the field of the American Revolution."--Journal of Southern History

"Rankin has given us a well-researched volume of high literary and scholarly quality that should stimulate similar studies of state military organizations in the War of Independence."--William and Mary Quarterly