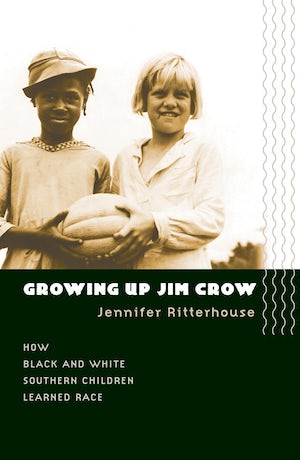 In the segregated South of the early twentieth century, unwritten rules guided every aspect of individual behavior, from how blacks and whites stood, sat, ate, drank, walked, and talked to whether they made eye contact with one another. Jennifer Ritterhouse asks how children learned this racial "etiquette," which was sustained by coercion and the threat of violence. More broadly, she asks how individuals developed racial self-consciousness.

Parental instruction was an important factor--both white parents' reinforcement of a white supremacist worldview and black parents' oppositional lessons in respectability and race pride. Children also learned much from their interactions across race lines. The fact that black youths were often eager to stand up for themselves, despite the risks, suggests that the emotional underpinnings of the civil rights movement were in place long before the historical moment when change became possible. Meanwhile, a younger generation of whites continued to enforce traditional patterns of domination and deference in private, while also creating an increasingly elaborate system of segregation in public settings. Exploring relationships between public and private and between segregation, racial etiquette, and racial violence, Growing Up Jim Crow sheds new light on tradition and change in the South and the meanings of segregation within southern culture.

Jennifer Ritterhouse is associate professor of history at George Mason University. She is editor of Sarah Patton Boyle's The Desegregated Heart: A Virginian's Stand in Time of Transition and coeditor of the award-winning Remembering Jim Crow: African Americans Tell About Life in the Segregated South.
For more information about Jennifer Ritterhouse, visit the Author Page.

"Explores how black and white southern children developed a sense of racial identity and learned to carry out their expected roles in southern society."--Southwestern Historical Society

"A substantial contribution to the burgeoning field of child identity development in the segregated US South."--African American Review

"Provides readers . . . with a guide for rooting out the vestiges of Jim Crow that persist today."--Southern Cultures

"A fascinating collection. . . . Ritterhouse does an excellent job reporting on the moments in the lives of both black and white Southerners."--Historian

"Sheds new light on questions of change and continuity in the South."--Carolina Country