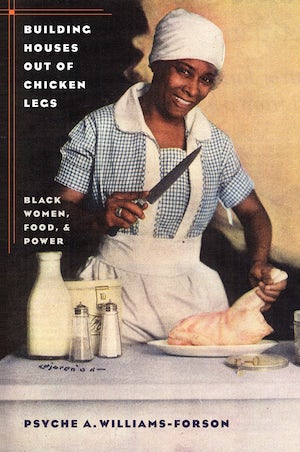 Chicken--both the bird and the food--has played multiple roles in the lives of African American women from the slavery era to the present. It has provided food and a source of income for their families, shaped a distinctive culture, and helped women define and exert themselves in racist and hostile environments. Psyche A. Williams-Forson examines the complexity of black women's legacies using food as a form of cultural work. While acknowledging the negative interpretations of black culture associated with chicken imagery, Williams-Forson focuses her analysis on the ways black women have forged their own self-definitions and relationships to the "gospel bird."

Exploring material ranging from personal interviews to the comedy of Chris Rock, from commercial advertisements to the art of Kara Walker, and from cookbooks to literature, Williams-Forson considers how black women arrive at degrees of self-definition and self-reliance using certain foods. She demonstrates how they defy conventional representations of blackness and exercise influence through food preparation and distribution. Understanding these complex relationships clarifies how present associations of blacks and chicken are rooted in a past that is fraught with both racism and agency. The traditions and practices of feminism, Williams-Forson argues, are inherent in the foods women prepare and serve.

"Likely to prove useful to students of cultural identity and stereotype."--Western Folklore

"A highly informative read. . . . I am sure it will become a permanent part of the foodway canon. Williams-Forson is an excellent writer who has done some interesting research and pieced together a highly readable book."--The Journal of Folklore

"Forces the reader to think carefully about the role of food in black women's history. And this alone, as one cookbook author might say, is a good thing."--American Historical Review

"Fascinating. . . . recommend[ed]. . . to those interested in American/African American popular culture, African American women's history, and the history of food."--Virginia Magazine

"[Williams-Forson] analyzes postcards, W.P.A. photos, literature, advertisements (drawing from her own collection of racist ephemera), stand-up comedy, television and movies. She finds plenty of evidence of both racial subjugation and also a reaffirming language of sorts in African-American women's culinary talents, allowing their story to emerge despite any prevailing white propaganda. At its best, Building Houses out of Chicken Legs parallels this brave course of self-definition. . . . [And] deftly examines the tight space between degrading stereotype and cultural touchstone."--New York Times Book Review

“Beyond the place of chicken as racial stereotype and in soul-food gatherings, Williams-Forson offers intriguing interpretations of black history, culture, and feminism.”--Booklist

Watch: Williams-Forson joins the conversation about food, race, and gender in this segment of the Melissa Harris-Perry Show. (11/29/2014, running time 7:32)