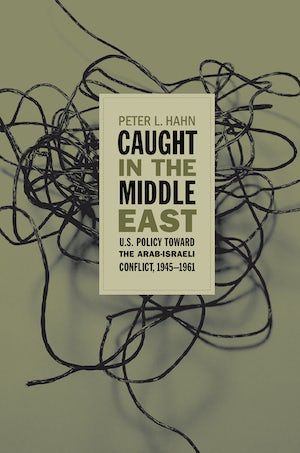 American postwar efforts to ameliorate Arab-Israeli relations entangled the United States in the Arab-Israeli conflict in complex ways. Peter L. Hahn explores the diplomatic and cultural factors that influenced the policies of Presidents Truman and Eisenhower as they faced the escalation of one of the modern world's most intractable disputes.

Truman tended to make decisions in an ad hoc, reactive fashion. Eisenhower, in contrast, had a more proactive approach to the regional conflict, but strategic and domestic political factors prevented him from dramatically revising the basic tenets Truman had established.

American officials desired--in principle--to promote Arab-Israeli peace in order to stabilize the region. Yet Hahn shows how that desire for peace was not always an American priority, as U.S. leaders consistently gave more weight to their determination to contain the Soviet Union than to their desire to make peace between Israel and its neighbors.

During these critical years the United States began to supplant Britain as the dominant Western power in the Middle East, and U.S. leaders found themselves in two notable predicaments. They were unable to relinquish the responsibilities they had accepted with their new power--even as those responsibilities became increasingly difficult to fulfill. And they were caught in the middle of the Arab-Israeli conflict, unable to resolve a dispute that would continue to generate instability for years to come.

Peter L. Hahn is professor of history at The Ohio State University and executive director of the Society for Historians of American Foreign Relations. He is author of The United States, Great Britain, and Egypt, 1945-1956: Strategy and Diplomacy in the Early Cold War.
For more information about Peter L. Hahn, visit the Author Page.

"[A] richly detailed study of America's policy toward the Arab-Istraeli conflict. . . . An impressive multi-archival and multidimensional account that can serve as a model for other practitioners of international history."--American Historical Review

"The product of extensive research in the U.S. and Israeli archives. . . . For those looking for a good reference for the key documents on U.S. policy in the Middle East from 1945 to 1961, this will be a helpful book."--Interdisciplinary Journal of Jewish Studies

"Caught in the Middle East is a very well-researched and thorough analysis of America's introduction to the Middle East as it emerged as [a] superpower. This lucid analysis of the complexities of the evolution of American foreign policy towards the Arab-Israel conflict provides a major contribution to the understanding both of the roots of US involvement in the region and of the complex formulation process of foreign policy in the United States."--International Affairs

"What emerges clearly from [Hahn's account] is how little Washington understood the consequences of foisting its cold war obsessions upon a region with other things on its mind."--The Nation

"This volume . . . adds enormously to knowledge of the issues that affected the early years of U.S. involvement in dealing with the Arab-Israeli dispute. [Hahn] relies on an impressive array of primary U.S. and Israeli archival documents to draw a complicated picture of the development of U.S. foreign policy toward the Arab-Israeli conflict during the Truman and Eisenhower administrations."--Choice

"Overall, this is a very thorough and at times eye-opening account of America's early efforts to address all aspects of the Arab-Israeli conflict and the factors that influenced its successes and failures. It is a meticulous work of history that will prove useful to scholars. Future academic assessments of this period will have to grapple with Hahn's account."--Middle East Journal