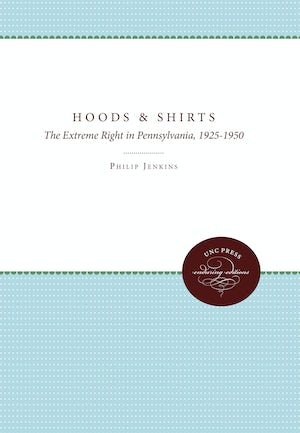 Extreme right-wing groups have always been a part of the American religious and political landscape. The era between the world wars, especially the 1930s, was a particularly volatile period, and by 1940, racist, nativist, and fascist groups had become so visible as to arouse public fears of insurrection and sabotage. In Hoods and Shirts, Philip Jenkins uses developments in Pennsylvania as a case study of the local activities and broader significance of organizations such as the Ku Klux Klan, the Italian Black Shirts, the Silver Legion, the German-American Bund, and Father Coughlin's Christian Front.

Pennsylvania's cities were a stronghold of several of the most active extremist movements, and Jenkins argues that while the threats they posed were often exaggerated to benefit the solidarity of the political mainstream, a loose coalition of dozens of these groups nevertheless constituted a formidable political presence in the state. In chapters on each of the major organizations, Jenkins traces their common commitment to a fascist agenda as well as the ethnic and religious differences that divided them. His comprehensive analysis sheds new light on how these right-wing movements influenced the mainstream of American politics in the interwar years.

Philip Jenkins is professor of history and religious studies at Pennsylvania State University. His many books include Pedophiles and Priests: Anatomy of a Social Crisis.


For more information about Philip Jenkins, visit the Author Page.

“Historians are fond of saying that we need detailed studies of an issue or a movement at the state level. Philip Jenkins has provided us with a first-class example of this genre with his well-researched study of right-wing extremism in Pennsylvania from 1925 to 1950. . . . . A fascinating study of a quarter-century of right-wing extremism in the Keystone state.”--Catholic Historical Review

“Jenkins has given us a fascinating study of a quarter-century of right-wing extremism in the Keystone state.”--Catholic Historical Review

"Philip Jenkins's extraordinary study . . . is an excellent model for the type of case studies that are needed to understand the regional and local complications of the far Right in the years of the Great Depression and World War II."--Journal of American History

"This unsettling local portrait of interwar America reveals why one of the most ethnically, socially, and politically diverse states gave rise to such a rich variety of right-wing hatred."--Choice

"A gold mine of information on pro-fascist and pro-Nazi groups in Pennsylvania during the 1930s."--Chronicles

"Jenkins knows the pertinent scholarship, has found fresh primary sources, and understands that there is no simple line between 'extremists' and the political mainstream. Hoods and Shirts is just the kind of local study we need to move beyond cliches about the far right."--Leo P. Ribuffo, author of The Old Christian Right