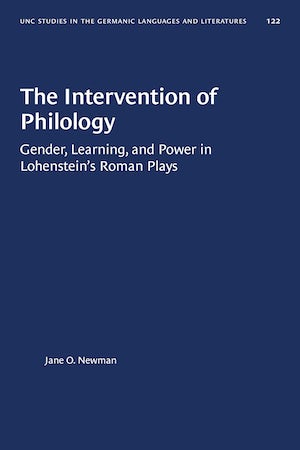 This book examines the interplay of history, textuality, dramaturgy, and politics in the school dramas of Daniel Casper von Lohenstein (1635–1683). The plays are based on well-known episodes from classical Roman history and were staged in Breslau by students at two all-male humanistic gymnasia. Organized exclusively around stories of such female protagonists as Agrippina, Cleopatra, Epicharis, and Sophonisbe, these productions required that the young actors dress as women to play roles that routinely involved scenes of political intrigue, incest, seduction, torture, and threatened infanticide. In print these plays were accompanied by massive annotational apparatuses that delineate the contours of the learned universe of eastern central Europe in exacting detail.

Newman's study sheds light on the ideological complexity of gender, politics, and learned culture in the early modern period as it emerges from these intriguing and often bizarre plays.

"Newman expertly guides the reader through the maze of seventeenth-century scholarly commentary, uncovering alternative readings as well as daring interventions in order to decode the manifold meanings encoded in Lohenstein's work. Drawing on a vast wealth of materials, including dramas in other languages, she has achieved what no other philologist of Lohenstein has before. In short, this book is a most original contribution that ought to be of interest to a vast number of scholars outside German literature. . ."-- Journal of English and Germanic Philology