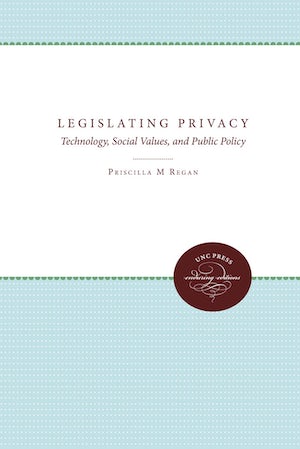 While technological threats to personal privacy have proliferated rapidly, legislation designed to protect privacy has been slow and incremental. In this study of legislative attempts to reconcile privacy and technology, Priscilla Regan examines congressional policy making in three key areas: computerized databases, wiretapping, and polygraph testing. In each case, she argues, legislation has represented an unbalanced compromise benefiting those with a vested interest in new technology over those advocating privacy protection. Legislating Privacy explores the dynamics of congressional policy formulation and traces the limited response of legislators to the concept of privacy as a fundamental individual right. According to Regan, we will need an expanded understanding of the social value of privacy if we are to achieve greater protection from emerging technologies such as Caller ID and genetic testing. Specifically, she argues that a recognition of the social importance of privacy will shift both the terms of the policy debate and the patterns of interest-group action in future congressional activity on privacy issues.

“A most important contribution to one of the key contemporary information ethics issues.”--Journal of Information Ethics

"Highly recommended to all individuals and institutions with an interest in information policy studies in general or privacy issues in particular."--Journal of Government Information

"The first political-science analysis of privacy-protection politics in the United States over the past three decades. . . . Regan has brightly illuminated contemporary political contests over new-technology threats to privacy and efforts (both successful and unsuccessful) at enacting new privacy protections."--Alan F. Westin, Columbia University