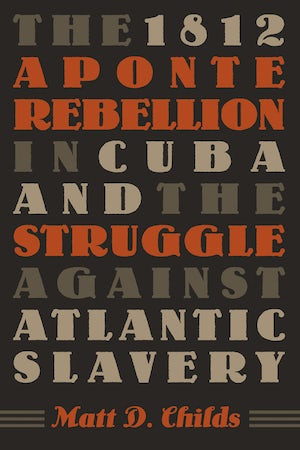 In 1812 a series of revolts known collectively as the Aponte Rebellion erupted across the island of Cuba, comprising one of the largest and most important slave insurrections in Caribbean history. Matt Childs provides the first in-depth analysis of the rebellion, situating it in local, colonial, imperial, and Atlantic World contexts.

Childs explains how slaves and free people of color responded to the nineteenth-century "sugar boom" in the Spanish colony by planning a rebellion against racial slavery and plantation agriculture. Striking alliances among free people of color and slaves, blacks and mulattoes, Africans and Creoles, and rural and urban populations, rebels were prompted to act by a widespread belief in rumors promising that emancipation was near. Taking further inspiration from the 1791 Haitian Revolution, rebels sought to destroy slavery in Cuba and perhaps even end Spanish rule. By comparing his findings to studies of slave insurrections in Brazil, Haiti, the British Caribbean, and the United States, Childs places the rebellion within the wider story of Atlantic World revolution and political change. The book also features a biographical table, constructed by Childs, of the more than 350 people investigated for their involvement in the rebellion, 34 of whom were executed.

Matt D. Childs is assistant professor of Caribbean history at Florida State University and coeditor of The Yoruba Diaspora in the Atlantic World.
For more information about Matt D. Childs, visit the Author Page.

"A welcome contribution to the debates about slave rebellion and also about the nature of the societies of both the slave-owning Caribbean islands and of the free people of colour. Its detail is always fascinating and telling, and its argument sound and much needed."--Journal of Latin American Studies

"A passionately written book that will prove to be a valuable contribution to slavery studies, as well as to the historiography of Cuba and the African diaspora."--The Journal of Interdisciplinary History

"Childs should be praised for redirecting the 'Aponte Rebellion' into the general literature of African diaspora studies."--Colonial Latin American Historical Review

"A careful and multi-layered account of the uprisings and the people who planned and carried them out. . . . Childs brilliantly renders this historical complexity."--The International History Review

“A groundbreaking study that is impressively researched and captivatingly written.”--Slavery and Abolition