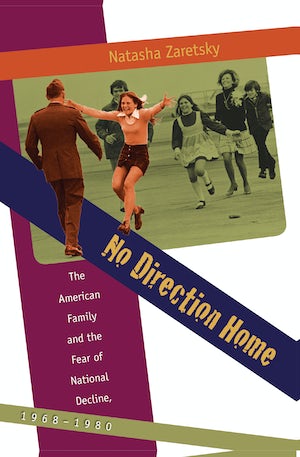 Between 1968 and 1980, fears about family deterioration and national decline were ubiquitous in American political culture. In No Direction Home, Natasha Zaretsky shows that these perceptions of decline profoundly shaped one another.

Throughout the 1970s, anxieties about the future of the nuclear family collided with anxieties about the direction of the United States in the wake of military defeat in Vietnam and in the midst of economic recession, Zaretsky explains. By exploring such themes as the controversy surrounding prisoners of war in Southeast Asia, the OPEC oil embargo of 1973-74, and debates about cultural narcissism, Zaretsky reveals that the 1970s marked a significant turning point in the history of American nationalism. After Vietnam, a wounded national identity--rooted in a collective sense of injury and fueled by images of family peril--exploded to the surface and helped set the stage for the Reagan Revolution. With an innovative analysis that integrates cultural, intellectual, and political history, No Direction Home explores the fears that not only shaped an earlier era but also have reverberated into our own time.

"Rich and compelling. . . . No Direction Home will find its way to bookstore shelves, journalist and pundit desks, and course syllabi for many students."--Peace and Change

"Inventively untangles a skein of cultural imagery that depicted the nation in terms of a family in peril--a crisis of literal and symbolic fatherlessness--and materialized in such disparate realms as the panic over dependency on Arab oil, the debate over Christopher Lasch's The Culture of Narcissism and emotions associated with the return of America's prisoners of War from Vietnam."--Rick Perlstein, The Nation

"[An] exemplary and richly suggestive work. . . . This is a powerful book on how the multiple traumas of the 1970s reshaped how Americans looked at themselves and the world."--The Journal of American History

"Provides a useful introduction to major themes of the decade. . . . An intelligent, subtle, and well-researched work on a complex and significant part of recent US history."--CHOICE

"Should serve as a model for future scholarly inquiry."--Journal of Southern History

“Natasha Zaretsky’s book is a tour de force that marshals sociology, economics, and psychology to explain how Americans, once sure of their destiny, plunged in the 1970s into a profound pessimism not only about their place in the world, but also about the integrity of their own institutions--from the government in Washington to the home and hearth. This pessimism--combining a sense of national peril with a fear of moral and personal decline--gave rise to the Republican realignment of the 1980s and underlay the conservative revival after September 11, 2001. Anyone who wants to understand the politics of the last three decades needs to read Zaretsky’s startlingly original book.”--John B. Judis, Senior Editor, The New Republic and author of The Folly of Empire