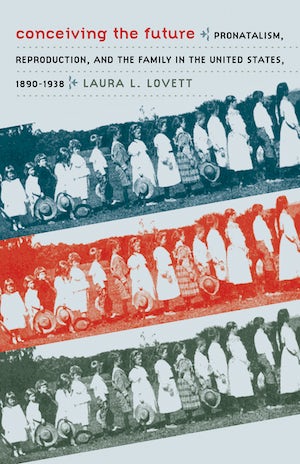 Through nostalgic idealizations of motherhood, family, and the home, influential leaders in early twentieth-century America constructed and legitimated a range of reforms that promoted human reproduction. Their pronatalism emerged from a modernist conviction that reproduction and population could be regulated. European countries sought to regulate or encourage reproduction through legislation; America, by contrast, fostered ideological and cultural ideas of pronatalism through what Laura Lovett calls “nostalgic modernism,” which romanticized agrarianism and promoted scientific racism and eugenics.

Lovett looks closely at the ideologies of five influential American figures: Mary Lease's maternalist agenda, Florence Sherbon's eugenic “fitter families” campaign, George Maxwell's “homecroft” movement of land reclamation and home building, Theodore Roosevelt's campaign for conservation and country life, and Edward Ross's sociological theory of race suicide and social control. Demonstrating the historical circumstances that linked agrarianism, racism, and pronatalism, Lovett shows how reproductive conformity was manufactured, how it was promoted, and why it was coercive. In addition to contributing to scholarship in American history, gender studies, rural studies, and environmental history, Lovett's study sheds light on the rhetoric of “family values” that has regained currency in recent years.

Laura Lovett is assistant professor of history at the University of Massachusetts in Amherst.
For more information about Laura L. Lovett, visit the Author Page.

"A useful complement to recent studies. . . . Contributes significantly to the further unraveling of . . . tenuous and slippery connections."--The Journal of American History

"A thoughtful and probing book that backdates the emergence of pronationalism in the United States to the late nineteenth century and exposes intersections of nostalgia, eugenics, motherhood, and the idealization of the white frontier family from the 1890s to the 1930s. . . . A nicely textured analysis."--ISIS

"A richly detailed, well-organized, and thoroughly researched narrative analyzing how perceptions about rural America, gender, race, and the family shaped pronatalist public policy around the turn of the twentieth century."--New England Quarterly

"Readers of this imaginative book will see many issues in a fresh light. They may be inspired to think in new ways about the connections between Americans' environmentalism, their celebration of the family, and their anxieties about women's roles outside the home."--Kansas History

"This eclectic mix of major and minor players and familiar and unfamiliar reform efforts demonstrates the ubiquity of pronatalist thought and its ideological flexibility."--Register of the Kentucky Historical Society