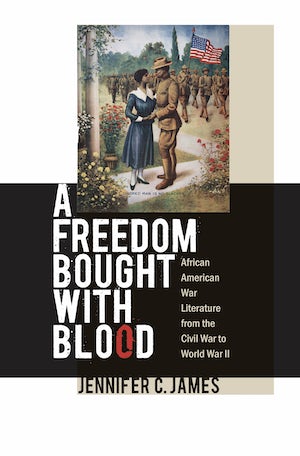 In the first comprehensive study of African American war literature, Jennifer James analyzes fiction, poetry, autobiography, and histories about the major wars waged before the desegregation of the U.S. military in 1948. Examining literature about the Civil War, the Spanish-American Wars, World War I, and World War II, James introduces a range of rare and understudied texts by writers such as Victor Daly, F. Grant Gilmore, William Gardner Smith, and Susie King Taylor. She argues that works by these as well as canonical writers such as William Wells Brown, Paul Laurence Dunbar, and Gwendolyn Brooks mark a distinctive contribution to African American letters.

In establishing African American war literature as a long-standing literary genre in its own right, James also considers the ways in which this writing, centered as it is on moments of national crisis, complicated debates about black identity and African Americans' claims to citizenship. In a provocative assessment, James argues that the very ambivalence over the use of violence as a political instrument defines African American war writing and creates a compelling, contradictory body of literature that defies easy summary.

"James walks us through a body of literature never previously gathered under a similar rubric. . . [She] map[s] out a genuinely new cognitive field that other scholars can now contest and hone."--Journal of American History

"That James has mastered the literature and history of the period is beyond question."--The Register of the Kentucky Historical Society

"A fascinating book. James's comparative study of a broad range of war literature by African American authors is sophisticated and consistently provocative. She grounds the theoretical scaffolding of her study with closely observed textual details."--James Smethurst, University of Massachusetts-Amherst, author of The Black Arts Movement: Literary Nationalism in the 1960s and 1970s

"James examines a topic that has been not only ignored, but also strangely avoided. By drawing on a range of textual genres from wartime America, she explores emerging formations of blackness that do not conform to the mainstream versions we have been taught to expect. The text is both easily accessible and cutting-edge in its scholarship and will be of interest to scholars in black Atlantic/African diaspora studies, African American studies, women's studies, sociology, queer studies, and literature."--Michelle Wright, University of Minnesota, author of Becoming Black: Creating Identity in the African Diaspora