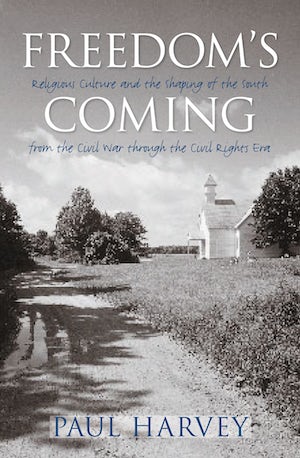 In a sweeping analysis of religion in the post-Civil War and twentieth-century South, Freedom's Coming puts race and culture at the center, describing southern Protestant cultures as both priestly and prophetic: as southern formal theology sanctified dominant political and social hierarchies, evangelical belief and practice subtly undermined them. The seeds of subversion, Paul Harvey argues, were embedded in the passionate individualism, exuberant expressive forms, and profound faith of believers in the region.

Harvey explains how black and white religious folk within and outside of mainstream religious groups formed a southern "evangelical counterculture" of Christian interracialism that challenged the theologically grounded racism pervasive among white southerners and ultimately helped to end Jim Crow in the South. Moving from the folk theology of segregation to the women who organized the Montgomery bus boycott, from the hymn-inspired freedom songs of the 1960s to the influence of black Pentecostal preachers on Elvis Presley, Harvey deploys cultural history in fresh and innovative ways and fills a decades-old need for a comprehensive history of Protestant religion and its relationship to the central question of race in the South for the postbellum and twentieth-century period.

Paul Harvey is professor of history at the University of Colorado at Colorado Springs. He is author of Redeeming the South: Religious Cultures and Racial Identities among Southern Baptists, 1865-1925 and coeditor of Themes in Religion and American Culture.
For more information about Paul Harvey, visit the Author Page.

"Adds much to a rich literature on the South and religion."--Florida Historical Quarterly

"A sweeping examination of Christianity in the South between the end of the Civil War and the late twentieth century."--Journal of Mississippi History

"[A] rich, complex book. . . . An important contribution to the history of religion and race in the South."--Anglican and Episcopal History

"Because Freedom's Coming so perfectly digests the best new works on the South, this is the place to play catch-up on southern religious scholarship. . . . The religious cultures of the South are too important and too unwieldy to be exhausted in one book, but if you're looking for a place to start, there isn't a better place than Freedom's Coming."--Southern Cultures

“A comprehensive investigation of religion in the post-Civil War and twentieth-century South. . . . An enlighening introduction to the intricate mix of politics, race, and religion that helped to shape history in the American South”--The Courier

"Harvey has done it again. . . . An outstanding contribution to studies in American cultural and religious history."--Baptist History-Heritage