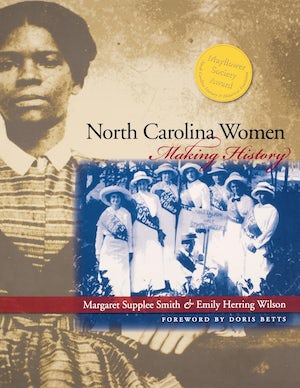 For generations, books on North Carolina history have included the names of only a few women. But in addition to such well-known and legendary figures as Queen Elizabeth I and Virginia Dare, a multitude of other women influenced the making of North Carolina. These women's stories have rarely been told, in part because their contributions tended to occur in the relative privacy of their families and communities.

This lively and comprehensive volume finally accords North Carolina women their long-awaited place in history. Margaret Supplee Smith and Emily Herring Wilson bring together a wealth of materials to demonstrate how North Carolina women lived, from the days of early native settlements to the end of World War II. Filled with names, places, colorful anecdotes, and more than two hundred photographs and documents that bring to life important moments in history, North Carolina Women establishes the critical influence of women in shaping the character and economy of the state and the values of its citizens.

"Richly annotated, copiously illustrated and painstakingly researched, this volume seeks to fill in all the gaps caused by partial and incomplete histories of North Carolina's women. . . . A valuable reference work for American and women's history."--Kliatt

"A comprehensive, richly textured survey that integrates women into North Carolina's history from the pre-colonial era to the end of World War II. . . . A useful reference for historians yet accessible to a general audience as well."--Journal of Southern History

"[A] stupendous addition to the literature of the state."--Fayetteville Observer Times

"Authoritative. . . . The elegant, outsized volume is an inviting, lavishly illustrated narrative that fills in the glaring gaps that marred the standard histories. . . . A marvelously organized, superbly readable portrayal of what women were doing while explorers were exploring, soldiers were soldiering, governors were governing, from those early days of Raleigh’s early colony through World War II, when women actually got into the fight themselves. . . . Its uniqueness gives it wings and its incomparable execution is sure to earn it accolades in more than one field."--Durham Herald-Sun

"Using the women’s own voices, taken from their written words and collections of oral histories, along with the revealing, passing remarks of leading men of the day, the authors chronicle a story of change that at times shows women taking one step forward and three steps back. . . . With sometimes stunning detail, it fills in some of the holes left in other books that claim to tell how North Carolina came to be what it is."--Raleigh News & Observer

"Stunning in scope, elegantly presented, and meticulously researched, North Carolina Women fills a huge void in our understanding of the role of women in the Tar Heel state. Not only is this essential reading for scholars, but the volume should appeal to anyone interested in North Carolina, southern, and women's history."--Alan D. Watson, University of North Carolina at Wilmington