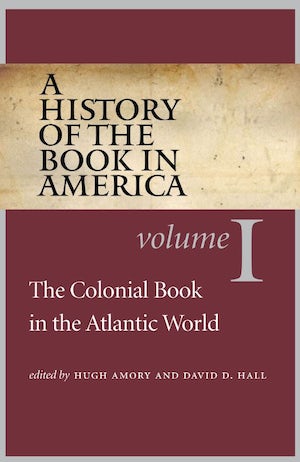 The Colonial Book in the Atlantic World carries the interrelated stories of publishing, writing, and reading from the beginning of the colonial period in America up to 1790. Three major themes run through the volume: the persisting connections between the book trade in the Old World and the New, evidenced in modes of intellectual and cultural exchange and the dominance of imported, chiefly English books; the gradual emergence of a competitive book trade in which newspapers were the largest form of production; and the institution of a "culture of the Word," organized around an essentially theological understanding of print, authorship, and reading, complemented by other frameworks of meaning that included the culture of republicanism. The Colonial Book in the Atlantic World also traces the histories of literary and learned culture, censorship and "freedom of the press," and literacy and orality.

Ross W. Beales, The College of the Holy Cross

“A masterpiece of scholarship. . . . The Colonial Book in the Atlantic World represents a superb achievement that makes accessible to a large variety of readers the results of numerous scholarly works and conferences. Its strength derives from the dialogue established between different traditions of scholarship: economic and social history of printing, bibliographical erudition, cultural sociology, and textual criticism.”—Roger Chartier, William and Mary Quarterly

"An interesting and enlightening series [that] provides an in-depth examination of the production and dissemination of the printed word in Colonial America.”—American Reference Books Annual

“The volume is an impressive feat of scholarship by almost any measure. Simply put, The Colonial Book in the Atlantic World is the best formal synthesis we have on the topic of print and book production in early America.”—Early American Literature

“[Coeditors Amory and Hall] and their contributors have done an excellent job of demonstrating the intricate interrelatedness of a wide range of practices, from papermaking, bookbinding, and pamphleteering to copyright, anonymous publication, and women’s literary coteries. . . . Most students of colonial American literature will find this volume an indispensable aid to their research in a myriad of ways.”—American Literature

"A model of scholarly publication and institutional cooperation. . . . A timely achievement and a great one. . . . Without university presses, we would still be waiting for HBA."—Journal of Scholarly Publishing

"What the History of the Book series shows so clearly is that the world we know, the communities to which we already belong, are reified and reinforced by books. Such is the incredible and incredibly flexible power of this primitive technology. Behold the book: It is limited but perfect."—Humanities magazine