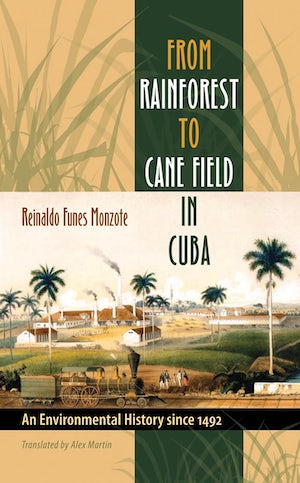 In this award-winning environmental history of Cuba since the age of Columbus, Reinaldo Funes Monzote emphasizes the two processes that have had the most dramatic impact on the island's landscape: deforestation and sugar cultivation. During the first 300 years of Spanish settlement, sugar plantations arose primarily in areas where forests had been cleared by the royal navy, which maintained an interest in management and conservation for the shipbuilding industry. The sugar planters won a decisive victory in 1815, however, when they were allowed to clear extensive forests, without restriction, for cane fields and sugar production. This book is the first to consider Cuba's vital sugar industry through the lens of environmental history. Funes Monzote demonstrates how the industry that came to define Cuba--and upon which Cuba urgently depended--also devastated the ecology of the island.

The original Spanish-language edition of the book, published in Mexico in 2004, was awarded the UNESCO Book Prize for Caribbean Thought, Environmental Category. For this first English edition, the author has revised the text throughout and provided new material, including a glossary and a conclusion that summarizes important developments up to the present.

"A very fine book that provides a comprehensive environmental history of the occupation of Cuba since 1492 and its transformation from a mostly forested island to one dominated by sugar cane."--American Historical Review

"An important study of the human-induced evolution of the Cuban landscape since the arrival of Columbus."--Caribbean Review of Books