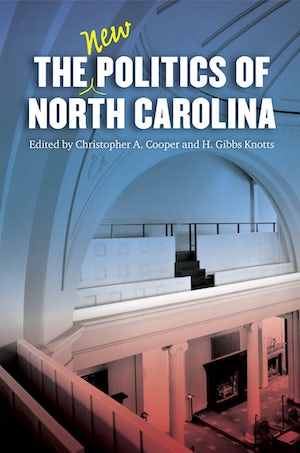 Political scientist V. O. Key in 1949 described North Carolina as a "progressive plutocracy." He argued that in the areas of industrial development, public education, and race relations, North Carolina appeared progressive when compared to other southern states. Reconsidering Key's evaluation nearly sixty years later, contributors to this volume find North Carolina losing ground as a progressive leader in the South. The "new politics" of the state involves a combination of new and old: new opportunities and challenges have forced the state to change, but the old culture still remains a powerful force.

In the eleven essays collected here, leading scholars of North Carolina politics offer a systematic analysis of North Carolina's politics and policy, placed in the context of its own history as well as the politics and policies of other states. Topics discussed include the evolution of politics and political institutions; the roles of governors, the judicial branch, interest groups, and party systems; and the part played by economic development and environmental policy. Contributors also address how geography affects politics within the state, region, and nation. Designed with students and interested citizens in mind, this collection provides an excellent introduction to contemporary North Carolina politics and government.

"Provides a useful overview for scholars of contemporary politics and is especially serviceable as a supplemental text for those who teach political science in North Carolina."--Journal of Southern History

"An interesting and cohesive analysis of the current state of the state's public life."--NC Historical Review

“This volume is a valuable addition to the scholarly literature on North Carolina government and politics and is an essential text for students interested in the politics of the state.”--William V. Moore, College of Charleston

“This is a very fine collection. All the authors of the individual chapters have experience teaching and researching in the Old North State. They have a very solid understanding of the state, its politics, and how certain things operate.”--Thad L. Beyle, University of North Carolina at Chapel Hill