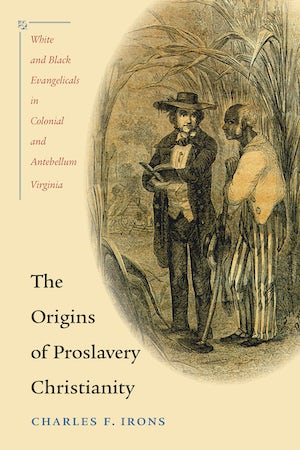 In the colonial and antebellum South, black and white evangelicals frequently prayed, sang, and worshipped together. Even though white evangelicals claimed spiritual fellowship with those of African descent, they nonetheless emerged as the most effective defenders of race-based slavery.

As Charles Irons persuasively argues, white evangelicals' ideas about slavery grew directly out of their interactions with black evangelicals. Set in Virginia, the largest slaveholding state and the hearth of the southern evangelical movement, this book draws from church records, denominational newspapers, slave narratives, and private letters and diaries to illuminate the dynamic relationship between whites and blacks within the evangelical fold. Irons reveals that when whites theorized about their moral responsibilities toward slaves, they thought first of their relationships with bondmen in their own churches. Thus, African American evangelicals inadvertently shaped the nature of the proslavery argument. When they chose which churches to join, used the procedures set up for church discipline, rejected colonization, or built quasi-independent congregations, for example, black churchgoers spurred their white coreligionists to further develop the religious defense of slavery.

"Suggest[s] useful ways of thinking about blacks as active agents in the civil and religious debates of the day."--Georgia Historical Quarterly

"Brings complexity to a history often reduced to a simple morality tale of 'churches in captivity' to white supremacy."--Register of the Kentucky Historical Society

"This excellent study reflects the author's considerable research into primary sources ranging from church records to manuscript collections and his mastery of the voluminous secondary literature. . . . A superb first book."--Catholic Historical Review

"A fresh and valuable perspective. . . . An important book with valuable research and insights. . . . Will be of great use to scholars and graduate students in the field."--Journal of Southern History