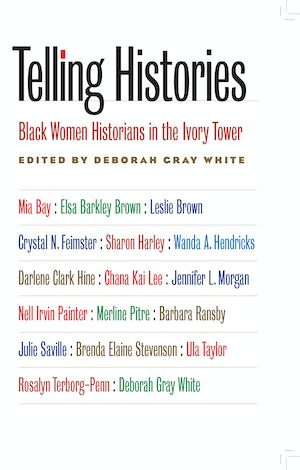 The field of black women's history gained recognition as a legitimate field of study only late in the twentieth century. Collecting stories that are both deeply personal and powerfully political, Telling Histories compiles seventeen personal narratives by leading black women historians at various stages in their careers. Their essays illuminate how--first as graduate students and then as professional historians--they entered and navigated the realm of higher education, a world concerned with and dominated by whites and men. In distinct voices and from different vantage points, the personal histories revealed here also tell the story of the struggle to establish a new scholarly field.

Black women, alleged by affirmative-action supporters and opponents to be "twofers," recount how they have confronted racism, sexism, and homophobia on college campuses. They explore how the personal and the political intersect in historical research and writing and in the academy. Organized by the years the contributors earned their Ph.D.'s, these essays follow the black women who entered the field of history during and after the civil rights and black power movements, endured the turbulent 1970s, and opened up the field of black women's history in the 1980s. By comparing the experiences of older and younger generations, this collection makes visible the benefits and drawbacks of the institutionalization of African American and African American women's history. Telling Histories captures the voices of these pioneers, intimately and publicly.

Deborah Gray White is Board of Governors Professor of History at Rutgers University. Her previous books include Too Heavy a Load: Black Women in Defense of Themselves, 1894-1994 and Ar'n't I a Woman?: Female Slaves in the Plantation South.
For more information about Deborah Gray White, visit the Author Page.

"Telling Histories details the dialectic between the obstacles [African American women] faced and their accomplishments, showing how demanding the academy has been of black women academics and how equally demanding they have been of themselves."-- Women's Review of Books

"In Telling Histories: Black Women Historians in the Ivory Tower, 17 professors prove by their collective experiences that they have built their own community of support."--A Nota Bene selection of The Chronicle of Higher Education

"The essayists offer readers much to think about as each tells her story of becoming a historian and of survival and success in the academy. . . . Recommended."--Choice

"Many of the contributors offer very poignant and personal accounts of their struggles. . . . These essays do a masterful job of conveying the complexities of these struggles, while at the same time they offer the reader a clear view of the ways many of these women have been able to cope with these difficulties even as they continue to function as scholars and teachers. . . . A very timely book."--The Journal of Southern History

"Engagingly written . . . should appeal to multiple audiences. . . . The book is not only valuable for graduate students but is also a significant contribution to the field and should facilitate bringing down barriers, both within and outside the academy, that constrain the professorial ranks, stifle voices, and preclude diverse academicians and scholars from writing and teaching without restraint."--H-Net Reviews

"These narratives offer personal perspectives on the world of black women in the ebony and ivory towers. . . . One can appreciate the honest and forthrightness of many of the narratives."--Journal of African American History