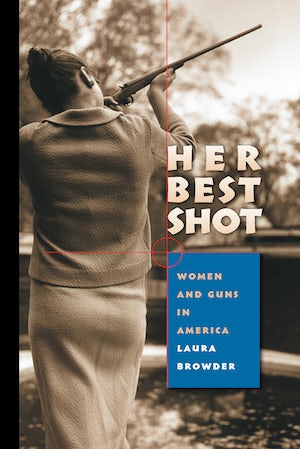 The gun-toting woman holds enormous symbolic significance in American culture. For over two centuries, women who pick up guns have disrupted the popular association of guns and masculinity, spurring debates about women's capabilities for violence as well as their capacity for full citizenship. In Her Best Shot, Laura Browder examines the relationship between women and guns and the ways in which the figure of the armed woman has served as a lightning rod for cultural issues.

Utilizing autobiographies, advertising, journalism, novels, and political tracts, among other sources, Browder traces appearances of the armed woman across a chronological spectrum from the American Revolution to the present and an ideological spectrum ranging from the Black Panthers to right-wing militias. Among the colorful characters presented here are Deborah Sampson, who disguised herself as a man to fight in the American Revolution; Pauline Cushman, who posed as a Confederate to spy for Union forces during the Civil War; Wild West sure-shot Annie Oakley; African explorer Osa Johnson; 1930s gangsters Ma Barker and Bonnie Parker; and Patty Hearst, the hostage-turned-revolutionary-turned-victim. With her entertaining and provocative analysis, Browder demonstrates that armed women both challenge and reinforce the easy equation that links guns, manhood, and American identity.

Laura Browder is professor of English at Virginia Commonwealth University, where she teaches in the creative writing program. She is author of Rousing the Nation: Radical Culture in Depression America and Slippery Characters: Ethnic Impersonators and American Identities (from the University of North Carolina Press).
For more information about Laura Browder, visit the Author Page.

"Deftly analyzes the figure of the armed woman as both cultural hero and villain."--American Historical Review

"A rich story."--Journal of Social History

"Fascinating. . . . Lucidly written and clearly argued. . . . Illuminat[es] a culture of violence through the study of popular culture, media representations, and political spectacle."--Journal of Interdisciplinary History

“Deftly explores one facet of the relationship between women and guns in American history: that most manifest in literary expression and advertising.”--Pacific Northwest Quarterly

“Browder’s book is far-ranging. It is filled with provocative observations on class dynamics and on the biological essentialism that is--and long has been--used to define women with guns.”--Journal of Southern History

“The work is appealingly written, satisfyingly illustrated, and well researched.”--CHOICE

Read: In a guest blog post, Browder responds to press about women and guns in the wake of the Sandy Hook shooting. Read "Women’s Gun Culture in America."