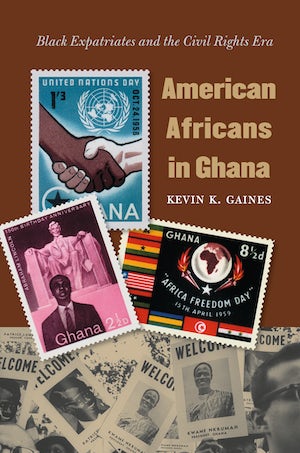 In 1957 Ghana became one of the first sub-Saharan African nations to gain independence from colonial rule. Over the next decade, hundreds of African Americans--including Martin Luther King Jr., George Padmore, Malcolm X, Maya Angelou, Richard Wright, Pauli Murray, and Muhammad Ali--visited or settled in Ghana. Kevin K. Gaines explains what attracted these Americans to Ghana and how their new community was shaped by the convergence of the Cold War, the rise of the U.S. civil rights movement, and the decolonization of Africa.

Kwame Nkrumah, Ghana's president, posed a direct challenge to U.S. hegemony by promoting a vision of African liberation, continental unity, and West Indian federation. Although the number of African American expatriates in Ghana was small, in espousing a transnational American citizenship defined by solidarities with African peoples, these activists along with their allies in the United States waged a fundamental, if largely forgotten, struggle over the meaning and content of the cornerstone of American citizenship--the right to vote--conferred on African Americans by civil rights reform legislation.

Kevin K. Gaines is director of the Center for Afroamerican and African Studies and professor of history at the University of Michigan. He is author of the award-winning Uplifting the Race: Black Leadership, Politics, and Culture during the Twentieth Century.
For more information about Kevin K. Gaines, visit the Author Page.

“Gaines has written an excellent and important book.”--The Nation

“In American Africans in Ghana, Kevin Gaines offers a richly detailed portrait of the community that gathered in Ghana around Nkrumah. He skillfully connects the lives of the 'returnees' with the wider history of the civil rights era in the United States and the politics of the cold war.”--The New York Review of Books

"Inspiring. . . . A valuable addition to the debate about the history of Pan-Africanism in Africa."--Journal of African History

"Gaines's signal achievement is that he skillfully has placed this narrative in the broad context of black internationalism. . . . Gaines has demonstrated how the expatriate experience is linked to the expansive history of antiracist and anticolonial thought and practice in the African diaspora. He has written a book that is indispensable for a complete grasp of that history."--Journal of American History

"A superb, scholarly text on pan-Africanism. Gaines gives a detailed analysis of the interconnections between African American and Caribbean activists and the pioneers of African decolonization in Ghana. The author leaves no stone unturned. . . . Essential."--Choice