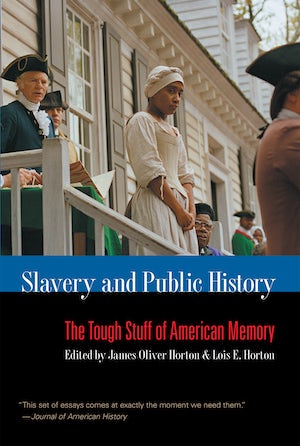 America's slave past is being analyzed as never before, yet it remains one of the most contentious issues in U.S. memory. In recent years, the culture wars over the way that slavery is remembered and taught have reached a new crescendo. From the argument about the display of the Confederate flag over the state house in Columbia, South Carolina, to the dispute over Thomas Jefferson's relationship with his slave Sally Hemings and the ongoing debates about reparations, the questions grow ever more urgent and more difficult.

Edited by noted historians James Oliver Horton and Lois E. Horton, this collection explores current controversies and offers a bracing analysis of how people remember their past and how the lessons they draw influence American politics and culture today. Bringing together some of the nation's most respected historians, including Ira Berlin, David W. Blight, and Gary B. Nash, this is a major contribution to the unsettling but crucial debate about the significance of slavery and its meaning for racial reconciliation.

"A chastening reminder that many are still missing the point [of black history in America], and even that the point may be more elusive than we thought. . . . Scattered throughout the book are many fascinating stories."--Times Literary Supplement

"This set of essays comes at exactly the moment we need them."--Journal of American History

"Destined to become a popular text in museum studies and public history courses, Slavery and Public History also merits attention from anyone interested in the history of slavery, memory, and contemporary American culture."--H-Net Reviews

"What is important about these essays is not what they tell about the past, but what they say about the efforts of public historians to break down the barriers that have made slavery and its legacy invisible at public venues. An outstanding collection."--Choice

"A fascinating collection of essays on the difficulties historians have faced in examining, recording, and reconciling American slavery in the context of a nation founded on principles of liberty and individual rights. . . . An enlightening look at how slavery is documented and presented in the nation’s collective memory."--Booklist

"Americans seem perpetually surprised by slavery--its extent (North as well as South), its span (over half of our four centuries of Anglo settlement), and its continuing influence. Slavery and Public History will help us all to remember and understand, so we can remove the vestiges of slavery that still affect us."--James W. Loewen, author of Lies My Teacher Told Me: Everything Your American History Textbook Got Wrong and Sundown Towns: A Hidden Dimension of American Racism