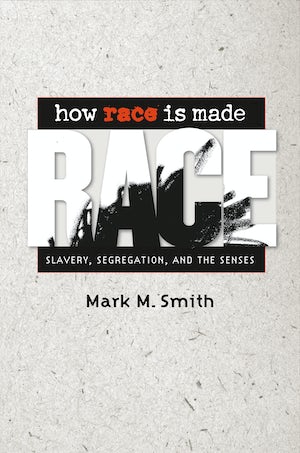 For at least two centuries, argues Mark Smith, white southerners used all of their senses--not just their eyes--to construct racial difference and define race. His provocative analysis, extending from the colonial period to the mid-twentieth century, shows how whites of all classes used the artificial binary of "black" and "white" to justify slavery and erect the political, legal, and social structure of segregation.

Based on painstaking research, How Race Is Made is a highly original, always frank, and often disturbing book. After enslaved Africans were initially brought to America, the offspring of black and white sexual relationships (consensual and forced) complicated the purely visual sense of racial typing. As mixed-race people became more and more common and as antebellum race-based slavery and then postbellum racial segregation became central to southern society, white southerners asserted that they could rely on their other senses--touch, smell, sound, and taste--to identify who was "white" and who was not. Sensory racial stereotypes were invented and irrational, but at every turn, Smith shows, these constructions of race, immune to logic, signified difference and perpetuated inequality.

Smith argues that the history of southern race relations and the construction of racial difference on which that history is built cannot be understood fully on the basis of sight alone. In order to come to terms with the South's past and present, Smith says, we must explore the sensory dynamics underpinning the deeply emotional construction of race. How Race Is Made takes a bold step toward that understanding.

Mark M. Smith is Carolina Distinguished Professor of History at the University of South Carolina. He is author or editor of six previous books, including Listening to Nineteenth-Century America (from the University of North Carolina Press) and Stono: Documenting and Interpreting a Slave Revolt.
For more information about Mark M. Smith, visit the Author Page.

"An ambitious and original experiment in the way the senses determined the ideology of race in southern American history over the last two centuries."--Senses & Society

"Smith's research is rich and his prose accessible, making [How Race is Made] an ideal primer on the socio-anthropological underpinnings of race."--Publishers Weekly

“Sensitive to black challenges, Smith's book is foremost a well-researched, frank, and revealing analysis of white racism. Only by coming to terms with the gut-level impact of sounds, smells, tastes, and textures--and by understanding the conceptual frameworks in which they were experienced--can [historians] begin to explain the power and persistence of something as impervious to reason as Americans' historical concepts of race.”--Journal of American History

"Smith has written a short, thought provoking book on the role of the senses--or more specifically, white sensory stereotypes--in constructing race in the United States. . . . Smith's history provokes reflection not only upon how people in the past sensed their worlds, but how our own socially constructed senses shape what we write and think today."--American Historical Review

"A slim volume that cuts a very wide path in the literature and opens several imaginative and analytical possibilities. . . . Merits serious consideration."--Journal of the Early Republic

"Focuses analytically and critically on questions virtually ignored by previous scholars . . . reexamines long-familiar sources through new lenses . . . nudges us to rethink basic components of what we already thought we knew."--South Carolina Historical Magazine