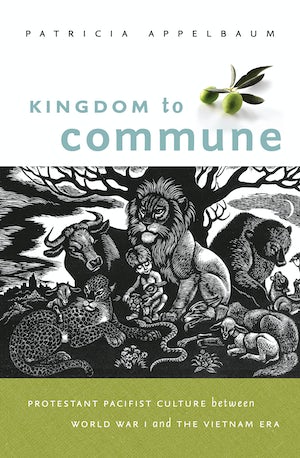 American religious pacifism is usually explained in terms of its practitioners' ethical and philosophical commitments. Patricia Appelbaum argues that Protestant pacifism, which constituted the religious center of the large-scale peace movement in the United States after World War I, is best understood as a culture that developed dynamically in the broader context of American religious, historical, and social currents.

Exploring piety, practice, and material religion, Appelbaum describes a surprisingly complex culture of Protestant pacifism expressed through social networks, iconography, vernacular theology, individual spiritual practice, storytelling, identity rituals, and cooperative living. Between World War I and the Vietnam War, she contends, a paradigm shift took place in the Protestant pacifist movement. Pacifism moved from a mainstream position to a sectarian and marginal one, from an embrace of modernity to skepticism about it, and from a Christian center to a purely pacifist one, with an informal, flexible theology.

The book begins and ends with biographical profiles of two very different pacifists, Harold Gray and Marjorie Swann. Their stories distill the changing religious culture of American pacifism revealed in Kingdom to Commune.

"A valuable resource for students and researchers in both religious studies and peace studies in the U.S. Highly recommended."--Choice

"A detailed discussion of pacifist culture. . . . Provides wonderful descriptions of cultural artifacts such as hymns . . . plays . . . and peace liturgies."--Christian Century

"[A] richly textured sociocultural exploration. . . . May prove to be a foundational edifice on which many future studies on the topic must build."--Journal of American History

"A significant contribution to communitarian studies as well as to the history of pacifism."--The Annals of Iowa

"A rich account of . . . 'Protestant pacifist culture' during the middle of the twentieth century. . . . An illuminating approach."--Church History