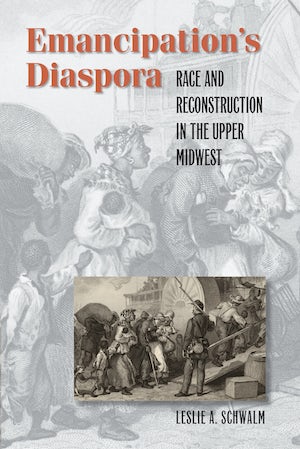 Most studies of emancipation's consequences have focused on the South. Moving the discussion to the North, Leslie Schwalm enriches our understanding of the national impact of the transition from slavery to freedom. Emancipation's Diaspora follows the lives and experiences of thousands of men and women who liberated themselves from slavery, made their way to overwhelmingly white communities in Iowa, Minnesota, and Wisconsin, and worked to live in dignity as free women and men and as citizens.

Schwalm explores the hotly contested politics of black enfranchisement as well as collisions over segregation, civil rights, and the more informal politics of race--including how slavery and emancipation would be remembered and commemorated. She examines how gender shaped the politics of race, and how gender relations were contested and negotiated within the black community. Based on extensive archival research, Emancipation's Diaspora shows how in churches and schools, in voting booths and Masonic temples, in bustling cities and rural crossroads, black and white Midwesterners--women and men--shaped the local and national consequences of emancipation.

Leslie A. Schwalm is associate professor of history, women's studies, and African American studies at the University of Iowa. She is author of A Hard Fight for We: Women's Transition from Slavery to Freedom in South Carolina.
For more information about Leslie A. Schwalm, visit the Author Page.

"Emancipation's Diaspora successfully demolishes the insistence of some authors that emancipation really did not change anything, but it is also exquisitely sensitive to the very complicated nature of emancipation's impact on ideas about race in the United States. . . . It is impossible to finish this book and not see slavery, race, and emancipation as truly national questions whose repercussions continued to reverberate throughout the entire nineteenth century and beyond."--Journal of Illinois History

"Expand[s] our historical understanding of black migration and presence in the Midwest after the Civil War. . . . [The] diversity of sources . . . creates an especially rich base of evidence that tells the story of Iowa, but also of the region and the country as a whole. . . . An important book for all scholars of midwestern history."--Annals of Iowa

"[A] remarkable book. . . . Relying on an impressive array of manuscript collections, newspapers, census data, diaries, letters, army records, and memoirs, Schwalm makes a case that is undeniable. . . . The book is especially strong in bringing into focus the lives of black women."--Minnesota History

"An engaging analysis of a region that historians of race have neglected. . . . [An] important book."--Journal of Southern History

"[Schwalm] has done historians of race, slavery, and Reconstruction a great service by locating her study in a veritable no-man's land [the Midwest]. . . . Impressive."--H-Net Reviews