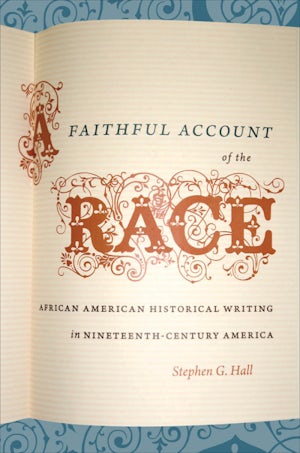 The civil rights and black power movements expanded popular awareness of the history and culture of African Americans. But, as Stephen Hall observes, African American authors, intellectuals, ministers, and abolitionists had been writing the history of the black experience since the 1800s. With this book, Hall recaptures and reconstructs a rich but largely overlooked tradition of historical writing by African Americans.

Hall charts the origins, meanings, methods, evolution, and maturation of African American historical writing from the period of the Early Republic to the twentieth-century professionalization of the larger field of historical study. He demonstrates how these works borrowed from and engaged with ideological and intellectual constructs from mainstream intellectual movements including the Enlightenment, Romanticism, Realism, and Modernism. Hall also explores the creation of discursive spaces that simultaneously reinforced and offered counternarratives to more mainstream historical discourse. He sheds fresh light on the influence of the African diaspora on the development of historical study. In so doing, he provides a holistic portrait of African American history informed by developments within and outside the African American community.

"The book's immense strength lies in its breadth and expansiveness. In conducting a chronological examination . . . Hall is able to present a wide range of understudied texts. . . . Critically important to the development and evolution of African American historiography."--Pennsylvania Magazine of History and Biography

“The distinctive contributions of A Faithful Account of the Race is not that it considers black understandings of the black experience, but that it selects one set of these black historical writings and weaves them into a 120-year story of the ways in which African Americans thought about black people in history, both as actors and as the subjects of action. . . . [An] excellent book.”--North Carolina Historical Review

"A fine first book. . . . It is persuasively argued and succeeds in enhancing our understanding of the development of early black history. . . . Clearly organized. . . . Well written. . . . Its subject of nineteenth-century black history texts is thoroughly researched."--H-Net Reviews

"Hall takes his subjects seriously as thinkers and historians and places them in the context of their time, rather than judging them according to modern standards of historical scholarship or analyzing them through the lens of modern racial concerns. . . . Fascinating and illuminating. . . . By demonstrating the richness and complexity of nineteenth-century African-American historical writing, Hall contributes to our understanding of American historiography and intellectual history."--Journal of American History

"Extensively researched and well written, this monograph does more than establish the credibility of nineteenth-century black historical writings. Hall successfully locates the professionalization of black history within a continuum that stretches back to the early republic."--American Historical Review