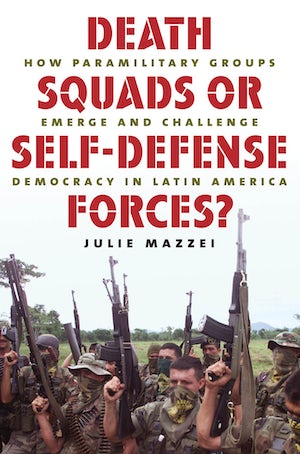 In an era when the global community is confronted with challenges posed by violent nonstate organizations--from FARC in Colombia to the Taliban in Afghanistan--our understanding of the nature and emergence of these groups takes on heightened importance. Julie Mazzei's timely study offers a comprehensive analysis of the dynamics that facilitate the organization and mobilization of one of the most virulent types of these organizations, paramilitary groups (PMGs).

Mazzei reconstructs in rich historical context the organization of PMGs in Colombia, El Salvador, and Mexico, identifying the variables that together create a triad of factors enabling paramilitary emergence: ambivalent state officials, powerful military personnel, and privileged members of the economic elite. Nations embroiled in domestic conflicts often find themselves stuck between a rock and a hard place when global demands for human rights contradict internal expectations and demands for political stability. Mazzei elucidates the importance of such circumstances in the emergence of PMGs, exploring the roles played by interests and policies at both the domestic and international levels. By offering an explanatory model of paramilitary emergence, Mazzei provides a framework to facilitate more effective policy making aimed at mitigating and undermining the political potency of these dangerous forces.

"This comparative study is a valuable attempt to provide a coherent explanation for the occurrence of paramilitary activity in countries that have been wracked by extraordinary levels of political violence."--International Affairs

"An important comparative study of paramilitary groups in Colombia, El Salvador, and Mexico (Chiapas). . . . This book will be of interest to academicians and policy makers involved in Latin American affairs as well as those engaged more broadly in the affairs of the Global South."--Choice

"The chapters of the case studies in this book are well worth reading, they are well written, and provide interesting details about the context and history of the paramilitary groups."--A Contra Corriente

"Provides a qualitative advance in our understanding of paramilitaries."--H-Net Reviews

“An interesting and significant contribution to the study of armed violence and right wing politics in Latin America.”--Journal of Latin American and Caribbean Anthropology

"This is the first analysis I have read that attempts to define paramilitary groups, drawing distinctions between PMGs and other forms of violent movements and examining strategies for disbanding PMGs. I applaud Mazzei's endeavor. Death Squads or Self-Defense Forces? is a well-researched and well-written book."--Leigh Payne, University of Wisconsin-Madison and University of Oxford