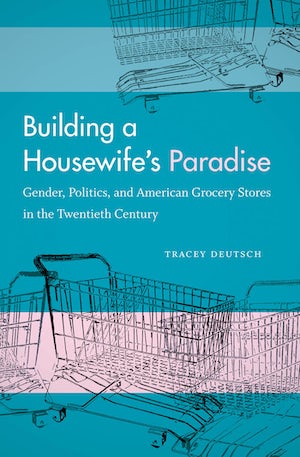 Supermarkets are a mundane feature in the landscape, but as Tracey Deutsch reveals, they represent a major transformation in the ways that Americans feed themselves. In her examination of the history of food distribution in the United States, Deutsch demonstrates the important roles that gender, business, class, and the state played in the evolution of American grocery stores.

Deutsch's analysis reframes shopping as labor and embeds consumption in the structures of capitalism. The supermarket, that icon of postwar American life, emerged not from straightforward consumer demand for low prices, Deutsch argues, but through government regulations, women customers' demands, and retailers' concerns with financial success and control of the "shop floor." From small neighborhood stores to huge corporate chains of supermarkets, Deutsch traces the charged story of the origins of contemporary food distribution, treating topics as varied as everyday food purchases, the sales tax, postwar celebrations and critiques of mass consumption, and 1960s and 1970s urban insurrections. Demonstrating connections between women's work and the history of capitalism, Deutsch locates the origins of supermarkets in the politics of twentieth-century consumption.

Tracey Deutsch is assistant professor of history at the University of Minnesota.
For more information about Tracey Deutsch, visit the Author Page.

"Paints a picture of stores alive with social interactions and struggles that often contradict the standardized model supermarkets are known for."--University of Chicago Magazine

"[Deutsch's] work makes a significant contribution to the growing historiography of consumer politics. . . . Deutsch demonstrates the central role that gender played in the rise of supermarkets."--Journal of American History

“[This] book causes readers to look more closely at one of the most important consumer experiences of the twentieth century.”--The Historian

“Tracey Deutsch’s well-written and impeccably researched book is a major contribution to studies of mass retailing and the politics of mass consumption . . . . [Her] richly detailed and rigorously analyzed study will find an appreciative audience among historians of gender, business, labor, and consumer culture.”--American Historical Review