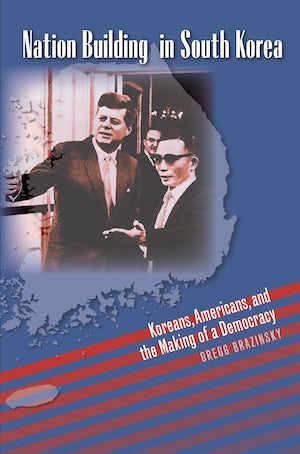 In this ambitious and innovative study Gregg Brazinsky examines American nation building in South Korea during the Cold War. Marshaling a vast array of new American and Korean sources, he explains why South Korea was one of the few postcolonial nations that achieved rapid economic development and democratization by the end of the twentieth century. Brazinsky contends that a distinctive combination of American initiatives and Korean agency enabled South Korea's stunning transformation. On one hand, Americans supported the emergence of a developmental autocracy that spurred economic growth in a highly authoritarian manner. On the other hand, Americans sought to encourage democratization from the bottom up by fashioning new institutions and promoting a dialogue about modernization and development.

Expanding the framework of traditional diplomatic history, Brazinsky examines not only state-to-state relations, but also the social and cultural interactions between Americans and South Koreans. He shows how Koreans adapted, resisted, and transformed American influence and promoted socioeconomic change that suited their own aspirations. Ultimately, Brazinsky argues, Koreans' capacity to tailor American institutions and ideas to their own purposes was the most important factor in the making of a democratic South Korea.

Gregg Brazinsky is assistant professor of history at the Elliott School of International Affairs at the George Washington University.
For more information about Gregg A. Brazinsky, visit the Author Page.

"A major contribution to the study of a crucial period of South Korean development. . . . A particularly important and timely book, as it not only details the close US-South Korean co-operation and the extent of US assistance in this period, but it also underscores the difficulties that external assistance faces in the process of nation-building."--International History Review

"Brazinsky, more than anyone else, has provided systematic, in-depth empirical evidence drawn from both the U.S. and South Korea to illustrate the subtle and changing dynamics of the U.S.-South Korean patron-client relationship. . . . Brazinsky's work will surely be read profitably by all those interested in modern economic development, democratization, and nation-building. Students of U.S. foreign relations will also profit from this in-depth case study of U.S. foreign policy, whereby U.S. intervention has actually led to what is, overall, a successful nation-building exercise."--American Historical Review

"Offers a complex and compelling narrative of the multilateral social, cultural and political connections between Americans and South Koreans during South Korea's formative years."--Pacific Affairs

"Brazinsky's fluency in the Korean language and tremendous research efforts allow him to present the voices of the people of the South and the formative role they played in their own evolution in more depth and sophistication that those who have written before him. . . . International history at its very best."--Journal of American History

"Even as successive U.S. political administrations prioritized security in [their] high-level dealings with South Korea, other U.S. agencies and organizations helped to build a more diverse and protodemocratic society from below. . . . Illuminates this complex dynamic in U.S.-South Korean relations."--Korean Quarterly